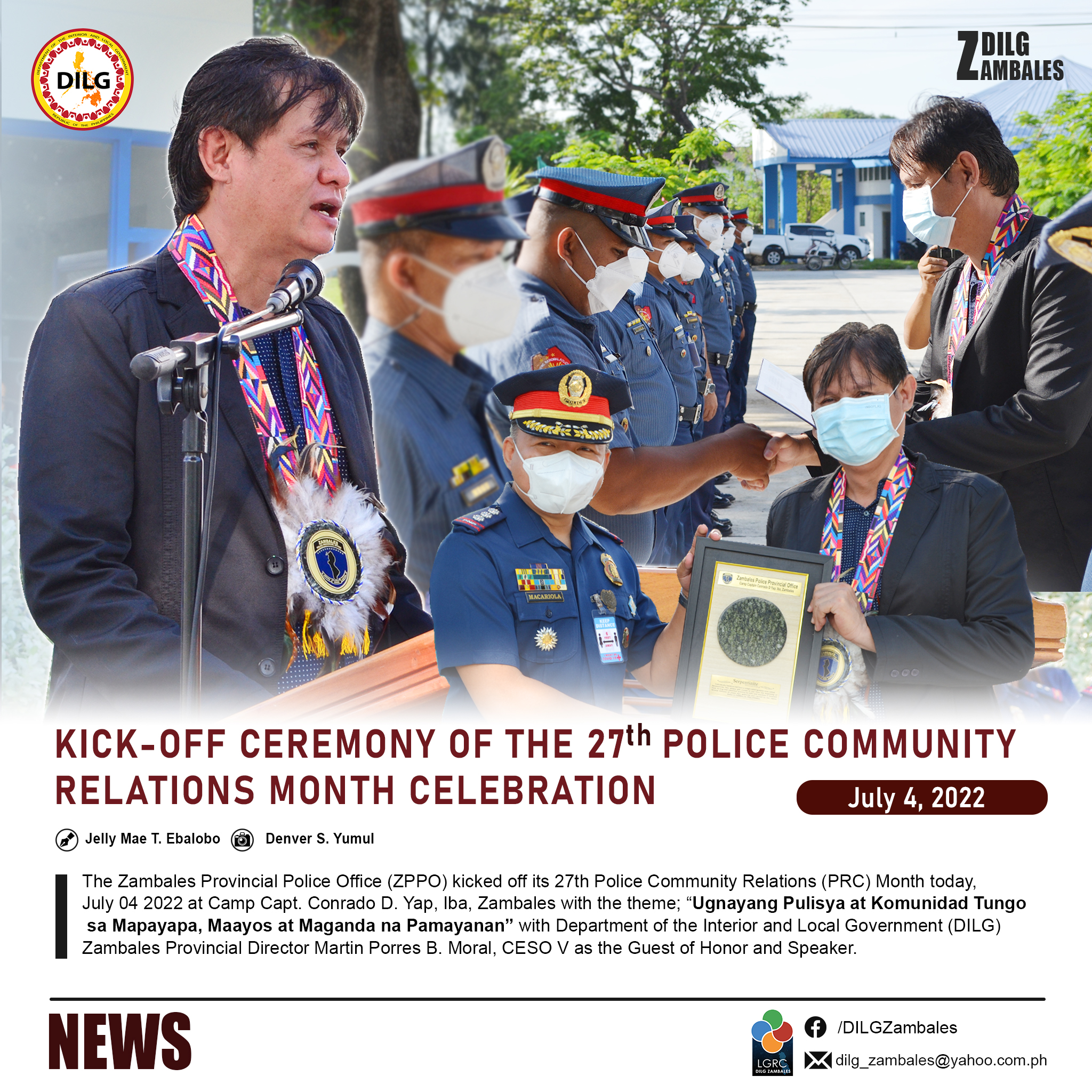 In his message, PD Moral commended PCOL Fitz A. Macariola, ZPPO Provincial Director and the rest of the Philippine National Police (PNP) Officers for their dedication and commitment in strengthening the Police Community relation through programs and related actions which resulted to a downward trend of crime incidents in the province. “Magpatuloy tayo sa pag promote, at pag enhance ng mga existing programs. Gayundin ang patuloy na pagsuporta sa mga future projects to continuously promote Police Community Relations. Pasasaan ba at makakamit natin dito ang zero crime rate at ang probinsya ng Zambales ay maging safest Province sa buong Pilipinas” he added. He encouraged everyone to double the efforts in making sure that the programs of the national government are felt at the grassroots level, “we have to double our efforts to make sure na ang mga programa ng pamahalaan ay maramdaman at maipaabot sa mga komunidad”.

The activity was highlighted by the awarding of certificate of commendation to different outstanding police officers for their valuable contribution in strengthening the partnership between the police and the community. Said awarding was led by PD Moral together with PCOL Macariolaand PLTCOL Joel M Usman, Acting Chief, Police Community Affairs Development Unit (PCADU).

The purpose of the celebration of the PCR month is to develop closer interaction between the community and the police in handling peace and order problems. The dignified police officers are tasked to conduct programs and activities which bring about widest public awareness, interest and support to the PNP.

Police Community Relations Month Celebration is under the Presidential Proclamation          No. 764 signed on January 2005 declaring the month of July of every year as PRC month. 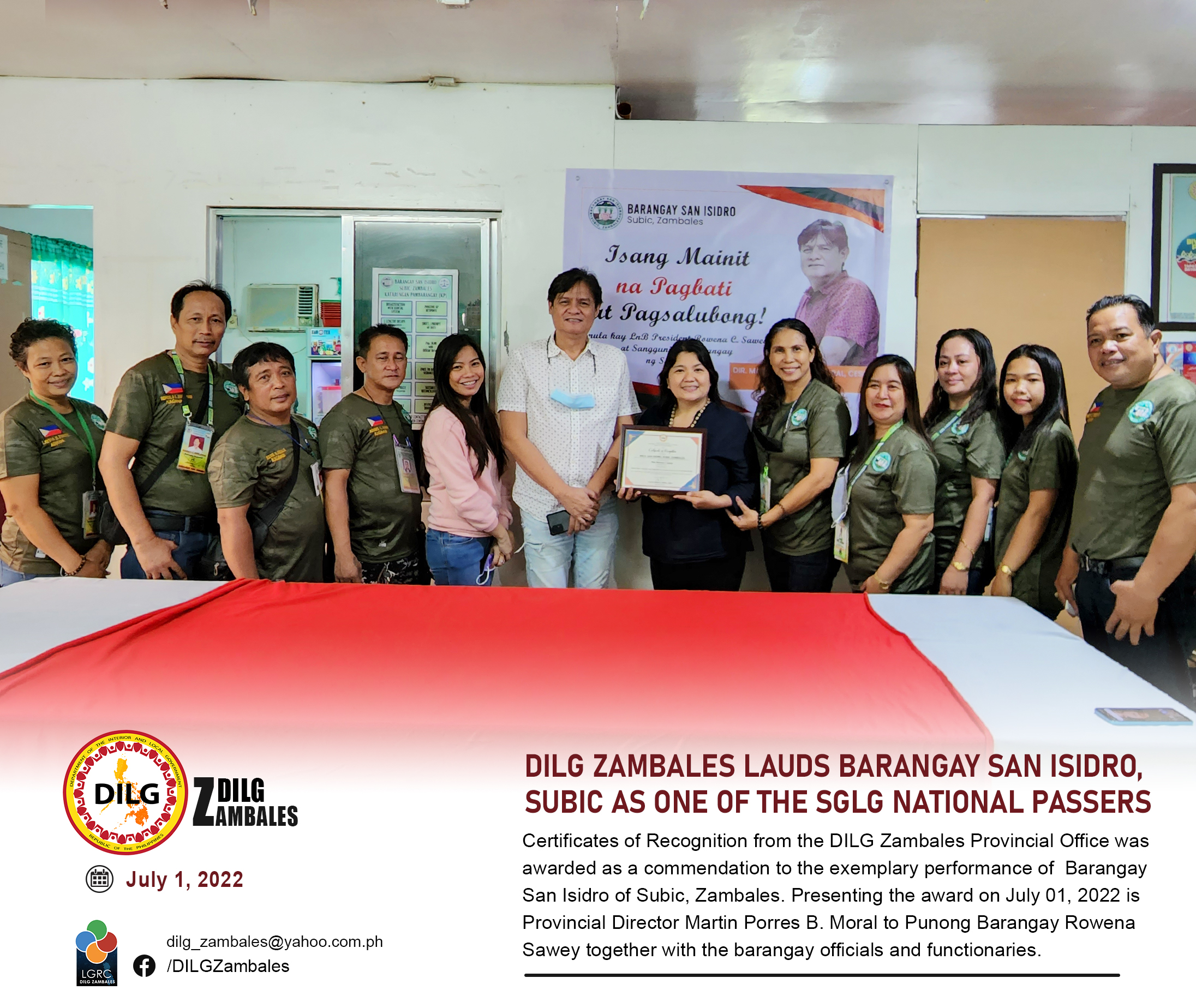 Proving their excellence in barangay governance, Barangay San Isidro of Subic, Zambales was recognized as one of the National Passers of the Seal of Good Local Governance for Barangay (SGLGB) in Central Luzon.

Certificates of Recognition from the DILG Zambales Provincial Office was awarded as a commendation to their exemplary performance. Presenting the award on July 01, 2022 is Provincial Director Martin Porres B. Moral to Punong Barangay Rowena Sawey, together with the barangay officials and functionaries.

PD Moral on his message to the barangay emphasized the essence of the seal in scaling up their performance and practices of good governance while upholding the principles of accountability, transparency, performance, and effectiveness.

SGLGB is a recognition-based program that monitors and awards the progress, leadership and improvement of the barangays in various areas. The barangays were assessed based on assessment criteria and indicators wherein barangays are expected to pass all of the three core areas, namely: Safety, Peace and Order; Financial Administration and Sustainability; and Disaster Preparedness and at least one (1) of the three (3) essential areas, namely: Social Protection and Sensitivity; Business-Friendliness and Competitiveness or Environmental Management. 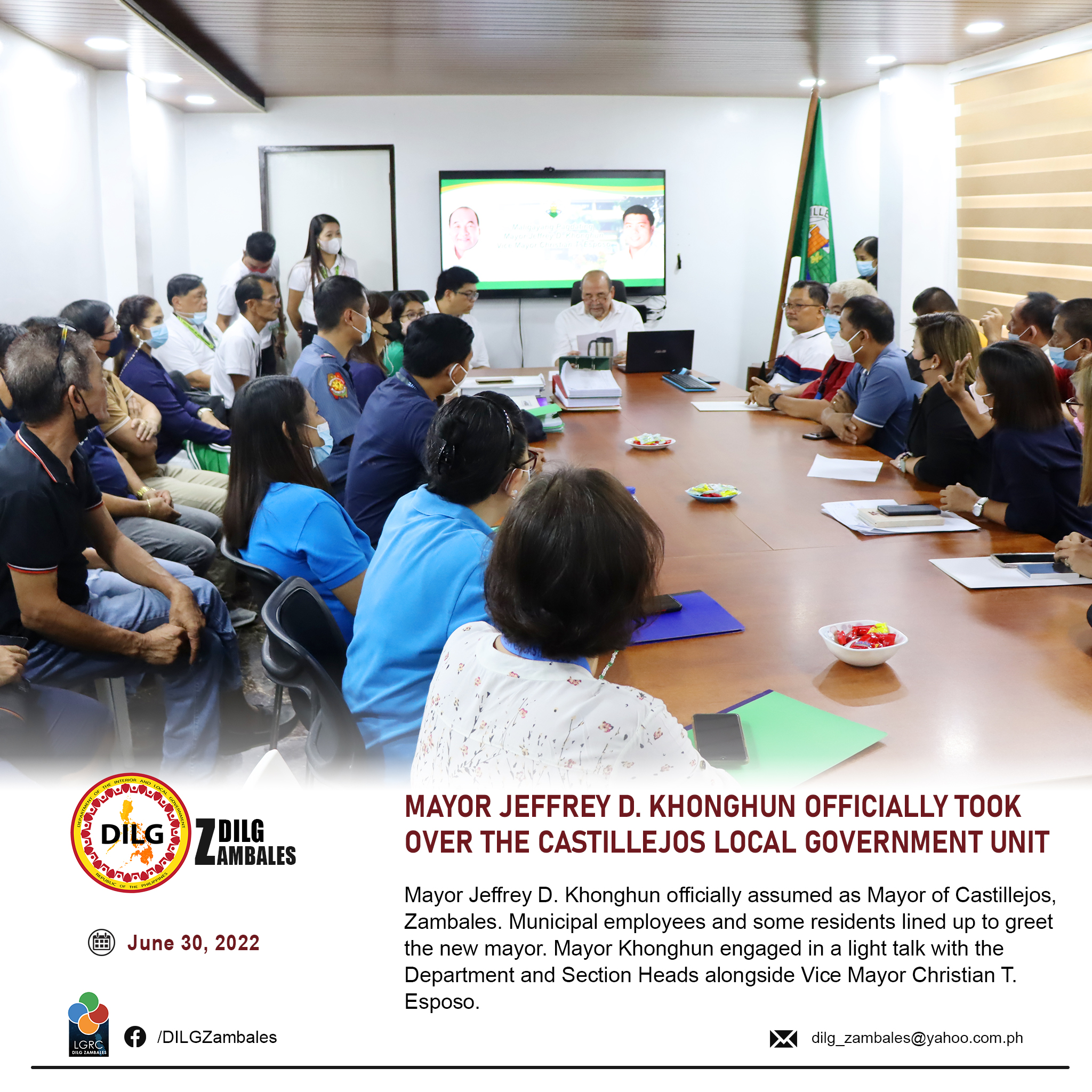 At exactly 12 noon of June 30, 2022, Mayor Jeffrey D. Khonghun officially assumed as Mayor of Castillejos, Zambales. Municipal employees and some residents lined up to greet the new mayor. Mayor Khonghun engaged in a light talk with the Department and Section Heads alongside Vice Mayor Christian T. Esposo.

Following the ceremony, LGU properties, plans and documents were turned over, and an onsite tour took place.