The history of Zambales unfolds in 1572 when the famous Spanish conquistador Juan de Salcedo responded to the proposed invitation of the people from the undulating mountain ranges, then still thick with vegetation, which knifed across the vast lap of virgin land. The earliest towns established in 1607, 1611, and 1612 were Masinloc, Iba, and Sta. Cruz, respectively. Masinloc was the first capital of the province. At various points in history, the capital shifted from each of the three towns earlier named. Iba, however, in view of its strategic location, finally became the permanent seat of the provincial government.

Zambales, which covers an area of 361,110 hectares, shares common boundaries with Pangasinan in the North, Tarlac and Pampanga in the East and Bataan in the South. The entire stretch of the province in the West is rimmed by the crystal-clear waters of vast China Sea. The 13 sprawling towns dolting the province from the North to South, most of them along the shoreline are : Sta. Cruz, Candelaria, Masinloc, Palauig, Iba, Botolan, Cabangan, San Felipe, San Narciso, San Antonio, San Marcelino, Castillejos and Subic. Olongapo, until it became a chartered City, was the 14th town. 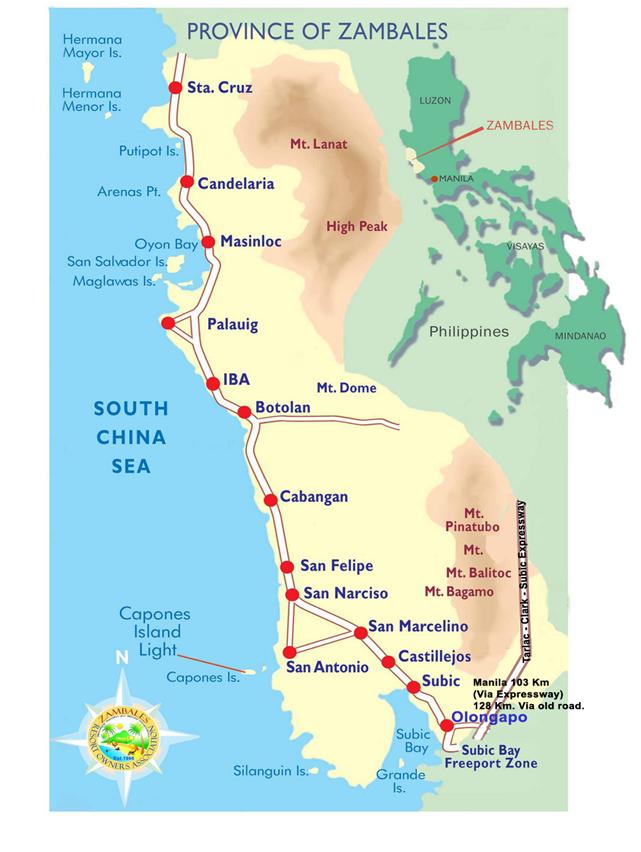 The name Zambales or the Hispanized term for Zambal, is derived from the spoken dialect and the ethnic site of the early Malay inhabitants of the place. It is alleged that the term was given currency on account of the fact that the Spanish conquistadors found these people highly superstitious who worship the spirits of their departed ancestors. Now, the closer equivalent of the word worship is Sambal in the dialect hence the term Zambales.

The Zambales believed to have originally come from the Celebes, pushed the aborigines, the kinky-haired, dwarfish Negritoes or Aetas, to the hinterlands and established Villages which were to became the nuclei of such municipalities as Sta. Cruz, Candelaria, Masinloc, Palauig, Iba, Botolan, Cabangan, and San Felipe, most of them in the northern portion of the province. They can be found likewise in Infanta, Baleng-Kageng (now Mabini), Alaminos, Agno, Burgos, Bani, Anda and Bolinao, all within the Province of Pangasinan. These eight towns were originally part of Zambales and it was in view of the physical difficulties in administration that they were ceded to Pangasinan.

While the Northern part of Zambales has long been occupied, the great plains in the South for sometime remained covered by impenetrable forests, thereby allowing the migration of two distinct groups much later. The Tagalogs formed the fishing Villages at the southernmost tip of the province which later became Subic and Olongapo. The Ilocanos, on the other hand, started the settlements that subsequently grew into what are now agricultural towns of Castillejos, San Marcelino, San Antonio, and the agro-fishing towns of San Felipe, Cabangan, and the Southern part of Botolan. These great people from the Ilocos Region in exodus, known for their visions and courage, their industry and tenacity, were to carve out flourishing communities from were nurtured the sons and daughters who enormously contributed to the socio-economic, political and cultural life of the people all over the country, let alone the province of Zambales, since then.