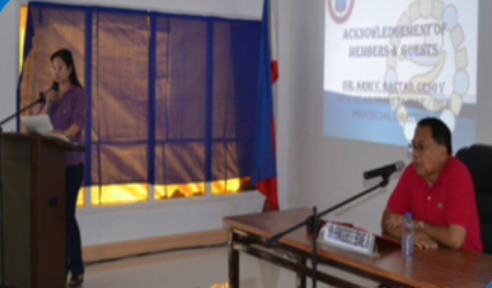 Provincial Peace and Order Council (PPOC) Chairperson Governor Hermogenes E. Ebdane, Jr. convened the meeting of the Provincial Peace and Order Council (PPOC) at the Conference Hall, Zambales Hotel, Zambales Sports Complex, Iba Zambales last April 15, 2014.  This is the first PPOC meeting of the province for CY 2014.  This event was made possible thru the effort of the DILG led by Provincial Director Armi V. Bactad, CESO V, PPOC Head Secretariat in close coordination with the Provincial Government.

The meeting was highlighted with the presentation from the Bureau of Fire Protection (BFP), Philippine Army (PA) and the PNP in maintaining peace and order in the province.

Meanwhile, Gov. Ebdane commended the AFP and PNP in their efforts in maintaining peace and ord

er in the province, along with their programs in helping the community. He also tackled the measures to be implemented that would ensure peace, order and safety in the community especially during the observance of the Holy Week. Finally, he instructed all Mayors to continue to coordinate with the PNP, AFP and BFP in a joint effort for the said campaign.

The Municipality of Palauig in Zambales has recently received the Performance Challenge Fund (PCF) from the Department of Interior and Local Government (DILG) as incentive for its exemplary good governance.

Dir.  Armi V. Bactad, CESO V, DILG Zambales Provincial Director personally handed the PCF check worth 1 Million pesos to Hon. Generoso F. Amog, Municipal Mayor last March 27, 2014 in a simple ceremony prepared by the LGU.  The fund will be used by the municipality in the concreting of the Sto. Niño – Tuktok Pangol Road.

The municipality is among the 5 Municipalities in the province conferred with the Seal of Good Housekeeping (SGH), Silver Level.

PCF is an incentive fund to LGUs in the form of counterpart funding to high-impact capital investment projects in the Annual Investment Program (AIP) and funded out of the 20% Local Development Fund consistent with national goals and priorities.

In order to qualify for the monetary incentive, LGUs must comply with the criteria of the Seal of Good Housekeeping (SGH) focused on sound Fiscal Management highlighting the absence of adverse COA Opinion on LGU financial statements and transparent and accountable governance putting value on  full disclosure and compliance to Anti-Red Tape Act 2007.

A new set of officers of the Liga ng mga Barangay Zambales Provincial Chapter for the term 2013-2016 was elected and proclaimed at the Conference Room of the DILG Provincial Office, Iba, Zambales last December 18, 2013.