True to its commitment in incentivizing LGUs for their outstanding performance in good governance, the Department of the Interior and Local Government-Zambales together with the Provincial Government recently led the Provincial Lupong Tagapamayapa Incentives Awards on June 14, 2018 held at Zambales Training and Conference Center, Iba, Zambales.

Each of the barangay winners received a cash award of P30,000 and a plaque.

DILG Officers Kristine Joy B. Pesimo, Jonnel B. Edillor and Cindy C. Cagalitan were also recognized and awarded with cash and plaque for their invaluable support in providing assistance and guidance to the said barangays.

The LTIA was established in 1997 as a means to institutionalize a system of granting economic benefits and other incentives to the Lupong Tagapamayapa that demonstrates exemplary performance in settling disputes at the grassroots level.

The winners were chosen based on the following criteria: efficiency in operation; effectiveness in securing the settlement of interpersonal dispute objective of the Katarungang Pambarangay; creativity and resourcefulness of the lupong tagapamayapa; area or facility for KP activities; and financial or non-financial support.

Brgy. San Juan, Botolan and Brgy. Camiing, Cabangan will be the contenders of the Province of Zambales at the regional level.

To guarantee the recognition of the roles of the youth in nation building, The Department of Interior and Local Government (DILG) Zambales spearheaded the conduct of SK Pambayan and SK Panlalawigan Pederasyon Orientation and Election last May 28-29, and June 7, 2018. The said activities were held in different venues.

The nationwide conduct of the activity is in compliance with Section 21 (b) of RA 10742, otherwise known as the “SK Reform Act of 2015” wherein the Pederasyon ng mga Sangguniang Kabataan at all levels, shall elect from among themselves subsequent to the conduct of SK Mandatory Training.

During the conduct of SK Pederasyon Orientation last May 28, 2018, the DILG Zambales lectured on the Legal Basis of the SK federation, Its Powers and Function particularly the federated Officers, the Constitution of the Election Committee and nominations of Candidates for the Officer of the Federation.

The SK Pambayan and Panlalawigan Pederasyon nomination and votation was facilitated by the Election Committee and Board of Election Supervisors (BES) and was attested by the Panel of Observers composed of representatives from the PNP, Academe and Civil Society Organizations.

Leading the new set of SK Panlalawigan Pederasyon Officers is Ms. Keith Doble from Botolan who was elected as president.

Listed below are the SK Pambayan Pederasyon Presidents in the 13 Municipalities of Zambales:

The Oath taking of the elected SK Pambayan and Panlalawigan Pederasyon Officers immediately took place after the proclamation of the winners officiated by their respective Local Chief Executives last May 29 and June 7, 2018 respectively. All elected SK Officials will assume office at noon of June 30, 2018. 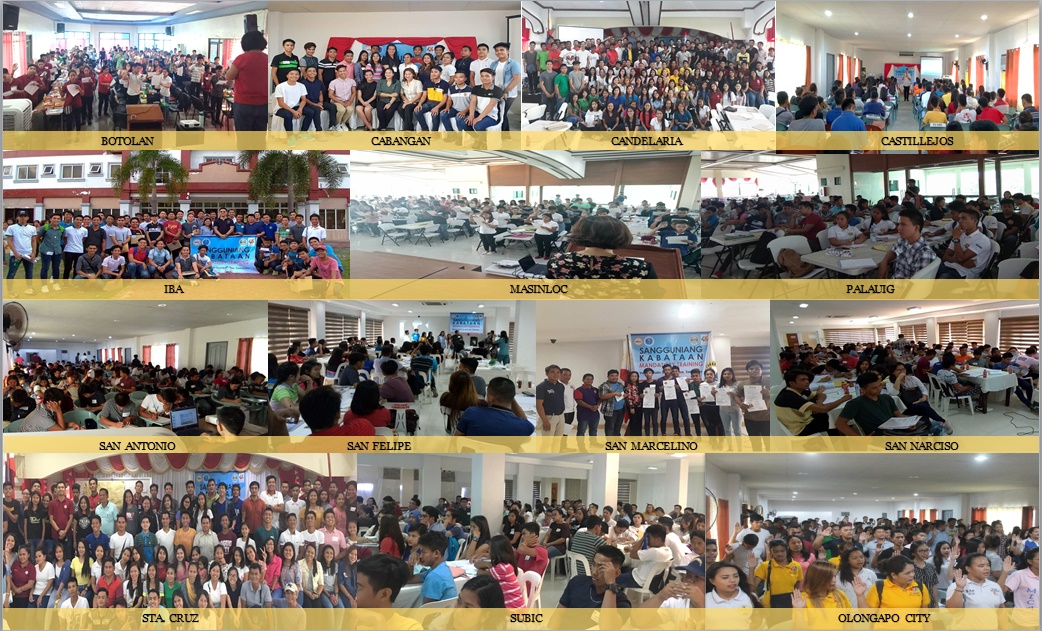 In order to capacitate and prepare the newly-elected youth leaders in nation- building in the province of Zambales, a total of 1, 585 Sangguniang Kabataan officials have undertaken and completed their mandatory training nearly two weeks after the 2018 barangay and SK election.


The training aimed to equip them with the necessary knowledge and skills which will help them perform their mandated powers and functions as prime movers of the youth.

The Sangguniang Kabataan Mandatory Training (SKMT) of SK Officials from 14 LGUs in Zambales, including Olongapo City was conducted simultaneously which started last May 18 and ended on May 24, 2018 in the following schedules and venues:

Figures below are SK Officials who completed the mandatory training from the 13 Municipalities and Olongapo City in Zambales:

Mass Oath taking of SK Officials who completed the training was officiated by their respective Local Chief Executive.

The training modules discussed were focused on decentralization and local governance, SK history and its salient features. The activity also provided workshops on how to conduct meetings and craft resolutions, how to do planning and budgeting. Code of Conduct and Ethical Standards of a Public Official were also given emphasis.

DILG Zambales hopes that through this training, Zambales will be able to produce a new breed of Matino, Mahusay at Maasahang SK Officials who will become the future leaders of our country.