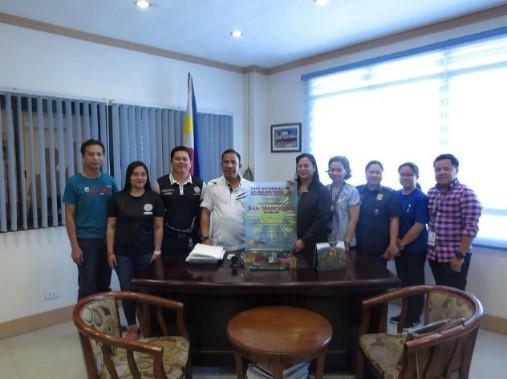 As one of the national awardees, DILG Zambales Provincial Director Armi V. Bactad awarded the marker to Hon. Jonathan John F. Khonghun, Municipal Mayor of Subic and Hon. Elvis R. Soria, Municipal Mayor of San Marcelino on February 19 and 21, 2020, respectively. The National ADAC Performance Award is given to LGUs that achieved an adjectival rating of Ideal (high functionality) based on the 2019 ADAC Performance Audit.

The ADAC of the Municipalities of Subic and San Marcelino received a high rating during the last functionality assessment with its evident effort to implement, coordinate and complement the national government’s measures to eradicate the country’s illegal drugs problem.

PD Bactad said in her message that the Department is the LGU’s partner in ensuring delivery of apt and responsive service to the people. She also encouraged everyone to continuously sustain and improve the LGU’s performance.

The Municipal Anti-Drug Abuse Council (MADAC) Functionality Audit is being conducted annually by a team duly created in the different level of LGUs, to measure the performance of the different Anti-Drug Abuse Councils (ADACs) in the country and recognize those ADACs who exemplary perform their duties and function to support President Rodrigo R. Duterte’s fight against Illegal Drugs in the country. ADACs were organized at the barangay, municipal/city and provincial level to spearhead the anti-illegal drug actions of the local government units to attain a drug-free community.