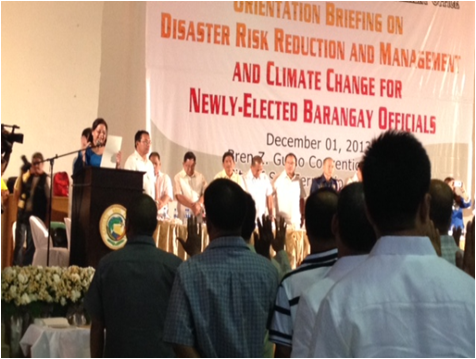 PDRRMO Angelina Blanco also gave an orientation of Disaster Preparedness and Climate Change.
Highlight of the activity is the presentation of the 4,040 newly-elected barangay officials of Pampanga by DILG Provincial Director MyrviApostol-Fabiawho took their oath of office before Governor Lilia G. Pineda.

In her message, the governor lauded the barangay officials for the peaceful conduct of barangay elections last October 28, 2013. “Now that the election is over, it’s now time to go back to our respective barangaysand work”.
She further encouraged the barangay officials to come up with development plans that will address the different issues and problems of the barangay. She likewise challenged them to make a good start through effective and efficient public service.