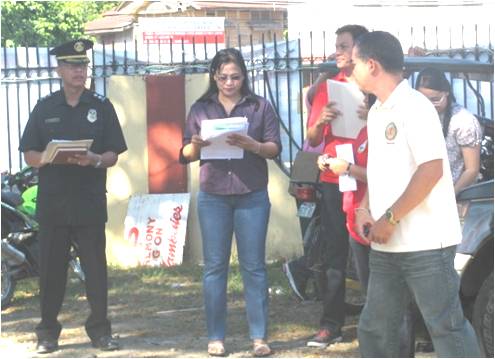 The provincial government of Zambales through the Provincial Disaster Risk Reduction Management Office (PDRRMO) has conducted a simultaneous earthquake drill on March 1, 2012.

An estimated 180 personnel from the different offices situated at the Provincial Capitol Building participated in the drill which started at exactly 9:06 A.M.

DILG Zambales OIC Provincial Director Armi V. Bactad and staff, Provincial Fire MarshallSupt. Jorge B. Fariñas together with his subordinates, Philippine Red Cross Chapter Administrator Maria Elizabeth J. Ednave and the Philippine Army headed by LTC. Michael G. Samson, C.O. 24 IB-Zambales served as observers and evaluators.  Each of them gave an impressive reaction and suggestions on the conduct of the drill.

The same exercise, which aims to ensure everyone’s readiness in case an emergency or disaster strikes was conducted in every municipality particularly in the different schools in the province.