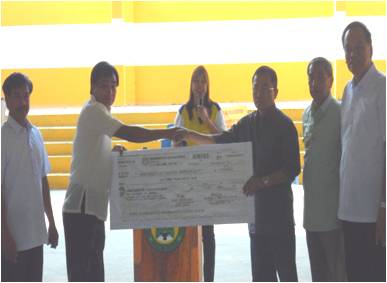 ARD Abraham A. Pascua, Nueva Ecija Concurrent Provincial Director attended the the weekly flag raising ceremony of the Local Government Unit of Talugtug, Nueva Ecija on March 10, 2014 wherein he awarded the ceremonial check of One Million Pesos Performance Challenge Fund for being granted, for the 2nd year in a row, the 2013 Seal of Good Housekeeping-Silver Award in recognition of the LGUs excellence in the fields of transparency, accountability and good governance.

ARD Pascua, in his message, commended officials and employees of the LGU headed by Mayor Quintino S. Caspillo, Jr., Vice Mayor Reynaldo C. Cachuela and members of the Sangguniang Bayan, and encouraged them to go for the Golden Award this year and to continue performing above par. He ended his message by congratulating the LGU for the award received.