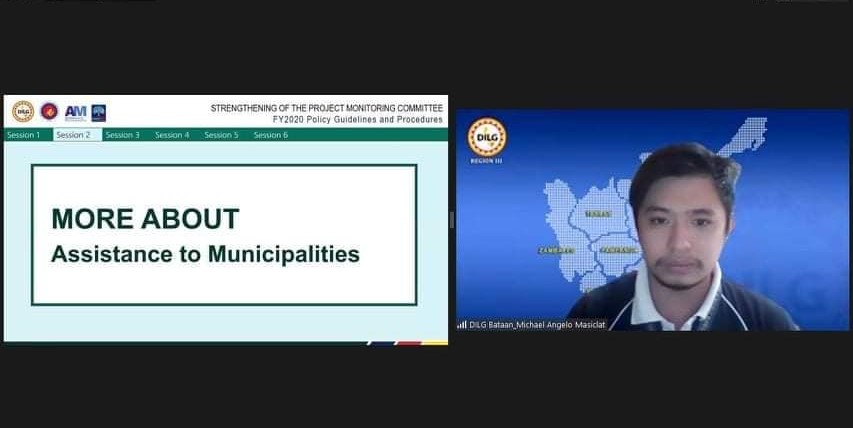 “Design is not just what it looks like and how it feels. Design is how it works.”

This was one of the statements that stirred up the attendees during the Virtual Orientation on the Strengthening of Project Monitoring Committees (PMCs) in Local Government Units (LGUs) conducted by DILG Bataan via Zoom online platform on Nov. 10-11, 2020.

The said two-day provincial rollout served as an avenue to heighten the capacities of Local PMCs composed of Municipal Local Government Operations Officers, representatives from Civil Society Organizations, members of Local Development Council, and other officials as appointed by their respective Local Chief Executive from among the nominees.

Through the six comprehensive sessions, the activity also aimed to enhance the knowledge of the participants on the different aspects of project monitoring and implementation relevant to their functions as PMCs, with the application of the health and safety standards based on the “new normal.”

Personnel from DILG Bataan’s Capability Development Section reintroduced the FY 2020 Policy Guidelines and Procedures and the Local PMC Roles and Responsibilities. Meanwhile, the DILG Office of Project Development Services tackled the Overview on the Local Government Support Fund Program and spearheaded the discussion on Things to Monitor, Project Standards, and Common Findings and Recommendations for the three sectors namely Local Access Roads, Water Supply and Sanitation, and Disaster Risk Reduction and Other Infrastructures.

Also in attendance were three invited engineers from DILG Region III Office who imparted their technical expertise during the open forum, and Cluster Head Melissa Nipal who emphasized the importance of proactive reception of the LGUs despite the limitations brought upon by the pandemic.