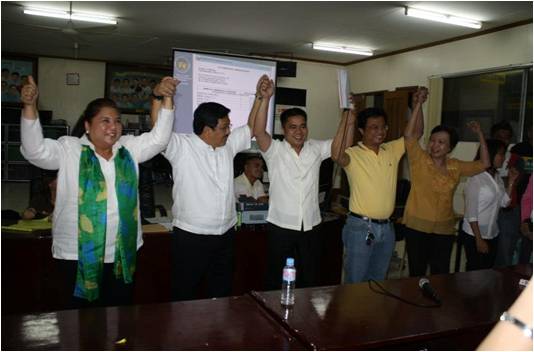 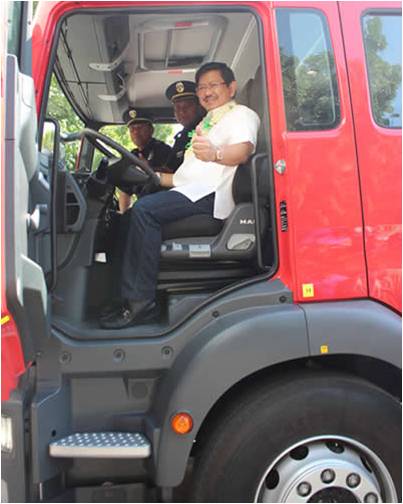 ANGELES CITY -The AngelesCity Fire Station has received a brand new Rosenbauer TLF 4000fire truck from the Department of the Interior and Local Government (DILG). This was announced by CityFire Marshall Chief Inspector Gary Alto, who said Angeles City is among the 38cities in the country that received a brand new fire truck from DILG Secretary Mar Roxas.
Mayor Edgardo Pamintuan thanked the DILG for including Angeles City in the first batch of recipients of the 38 modern fire trucks.
“We thank President Benigno ‘Noynoy’Aquino and DILG Secretary Mar Roxas for providing the new Rosenbauer fire truck which will be of great help to our city,” Pamintuan said. The distribution of fire trucks is part of the late Secretary Jesse Robredo’s program of modernizing the Bureau of Fire Protection (BFP).
Alto said the 38 fire trucks were part of the 76 fire trucks that the BFP is acquiring this year.
Alto revealed that Angeles City has five serviceable fire trucks.
“The acquisition of this new fire truck will help boost the fire fighting capability of the (fire) department,” he said.

The city government here received a P3 million check from the Department of Interior and Local Government (DILG) as incentive from the Performance Challenge Fund for being a recipient of a Seal of Good Housekeeping (SGH).

ANGELES CITY – Mayor Edgardo Pamintuan lauded the city’s Gender and Development (GAD) Office here for being recognized for its excellent implementation of programs for the empowerment of women.

The GAD, led by its head Purita “Poyen” David, received the Gintong Dangal ng Huwarang Kababaihan award in the field of Women Empowerment thru Efficient Service from the People’s Experimental and Environmental Research Society (PEERS).

According to Pamintuan, this is another feather in the cap of Angeleños and the local government unit of Angeles City for its practices in good governance, especially in providing equal rights to women and allowing them to play their roles in society freely. 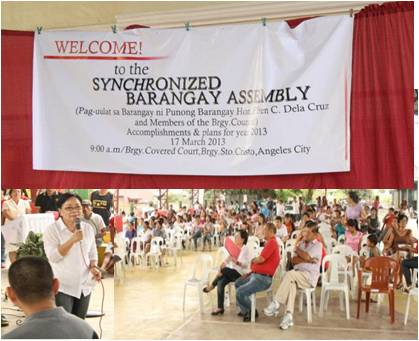 City Director Remedios M.  Rodriguez issued an  Advisory to all Punong Barangays of Angeles City urging them  to hold a “Barangay Assembly” in their respective areas on the very day pursuant to Proclamation No. 260 dated September 30, 2011 issued by President Benigno S. Aquino III and DILG Memorandum Circular No. 2012-156 dated Sept. 18, 2012.