DILG Region 3 initiated the conduct of a One-Day Consultation Workshop on Mainstreaming Basic Sectors in Local Governance and Bottom-Up Process in Planning and Budgeting on May 16, 2013 at Max’s Restaurant, Olongapo-Gapan Road, City of San Fernando, Pampanga.

Generally, the activity was aimed to foster stronger alliance among LGUs and basic sectors in the pursuit of pro-poor programs and promotion of inclusive economic growth and development.  The specific objective was to enable the participants to come up with respective provincial plan on mainstreaming basic sectors in local governance and BUB with the appreciation on the relevance of the process relative to the Department’s mandate of LGU capacity development. 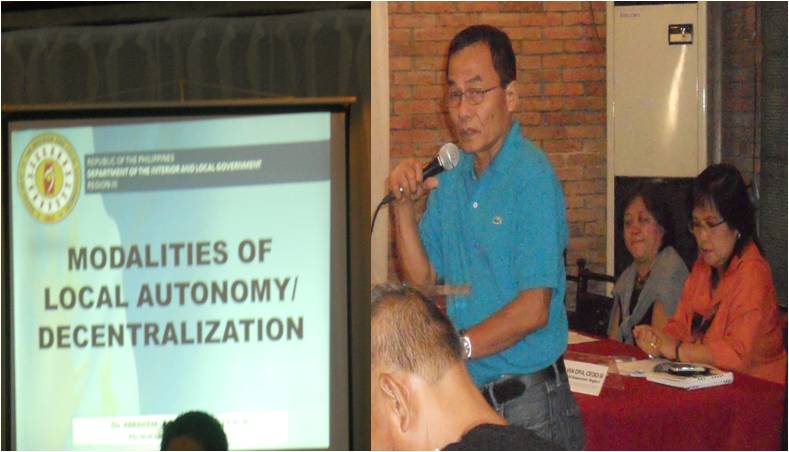 Asst. Regional Director and concurrent Nueva Ecija Provincial Director Abraham Pascua presented the overview of the activity.  In his presentation, he elucidated on the legal basis and rationale of the basic sectors’ participation in local governance as provided by the Local Government Code of 1991.  He emphasized the modalities of local autonomy which are decentralization, debureaucratization and deconcentration.  He stated the current issues being confronted at the local level that affect the maximum participation and engagement of CSOs in local governance.  He also discussed DILG Memorandum Circular No. 2010-73 dated 04 August 2010 on Accreditation of People’s Organizations, Non-Governmental Organizations and Similar Aggrupations and Selection of Representatives to the Local Special Bodies including the role of DILG as convenor, presiding officer and secretariat in Local Special Bodies (LSBs).  He further said that the Vice-Mayor, as the Sanggunian Presiding Officer or Secretary, shall be given an orientation on CSO Accreditation.  Lastly, he encouraged the participants to target CSO participation at the lower level.

sage, stressed the need to strengthen CSO participation.  She posed the challenge and task ahead of organizing LSBs and monitoring of monthly progress of BUB plans.  She believes that DILG people are ready for the challenges and capable to lead the LGUs in the CSO accreditation process.  She urged the contributions of everyone to the workshop to do well and help improve in the implementation of DILG prog

rams. She also expressed confidence that the team of Region 3 is capable to deliver this task.

eam (LPRAT) including its key roles and responsibilities.

In the afternoon, LGOO V Mariel Estacio discussed the 14 target basic sectors as provided in Section 3 of Republic Act 8425.  She also presented the proposed Calendar of Activities to be followed in the different levels of the Mainstreaming Basic Sector in Local Governance and BUB process.

OIC-CDD Chief Martin Porres Moral explained the mechanics of the workshop.  He facilitated each group in coming up with their expected outputs.  The participants were divided into 3 groups.  Group 1 worked on the key concepts on participatory governance, current situation of people’s participation in local governance and BUB.  Group 2 was assigned to work on the Guidelines in the Mapping/Organization of Basic Sectors while Group 3 was assigned on Responsibilities of DILG Fieldmen and Provincial Basic Sector Representatives.  Each group presented respective output.

The activity is in preparation to the accreditation of CSOs and organization of LSBs in line with the new set of local officials who are expected to assume in June 2013.##