The Department of the Interior and Local Government (DILG) has started its coaching session on managing Replication Inception Workshop (RIW) in the province of Bulacan’s School Hydrological and Information Network (SHINE) project.

Said activity was conducted on June 4-5, 2012 at the Malolos Resort Club Royale, Malolos City, Bulacan. It was attended by majority of the members of the Project Shine and one participant from PAGASA and one each Provincial/Regional GOFAR Focal Person. The resource persons were from the BLGD, LGOO VII Susita Bulawit and LGOO V Gemma Macatangay. 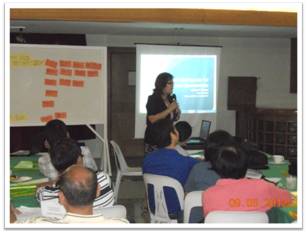 The Department of the Interior and Local Government Region 3, under the stewardship of     RD Florida M. Dijan, was awarded with a Special Recognition plaque by the Philippine Chamber of Commerce and Industry (PCCI).  Signed by the President of the PCCI, Atty. Miguel B. Varela, the award was in recognition of DILG R3’s significant support to the Central Luzon’s Business Permit and Licensing System (BPLS) program.

Read more: DILG R3 cited by the PCCI for its contribution to the BPLS Program of Central Luzon

The Department of the Interior and Local Government in Region 3 has released from October 2011 to April 2012, a total amount of Php 828,000 for the beneficiaries of the 64 deceased barangay officials in Central Luzon who died during their incumbency.