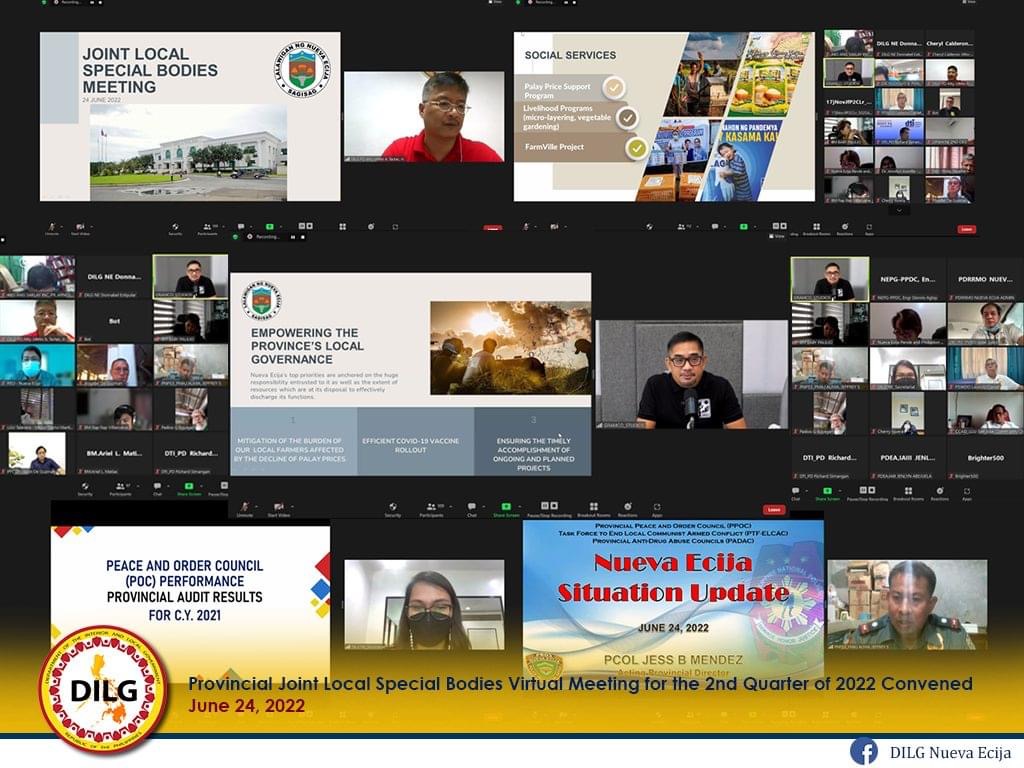 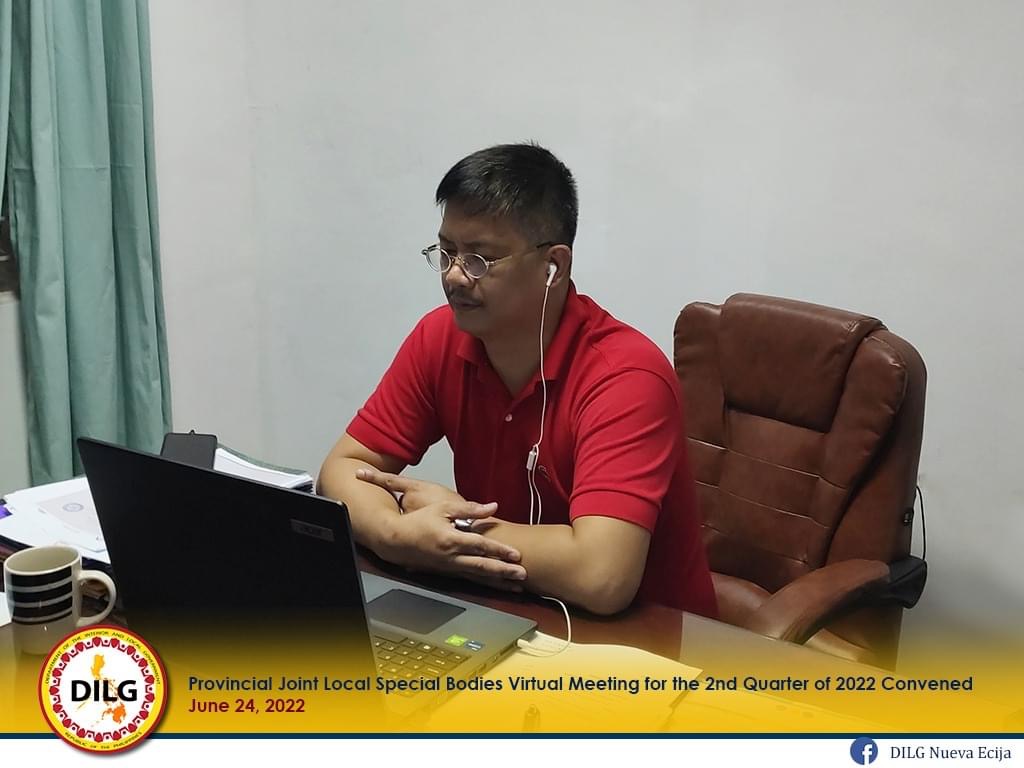 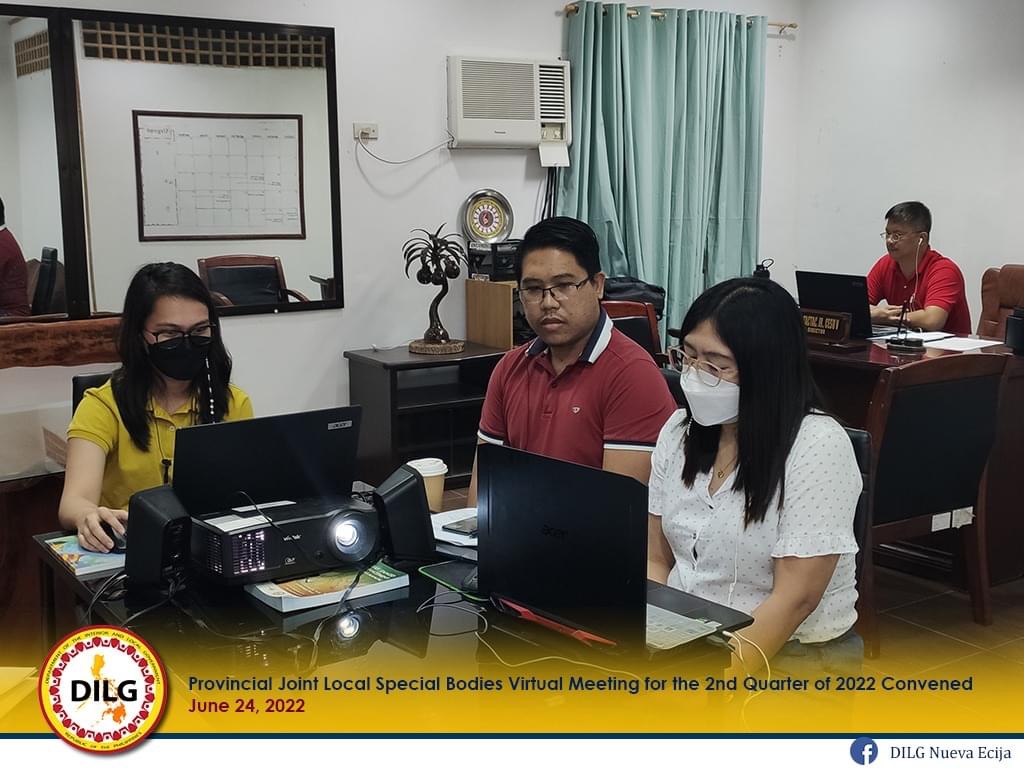 Governor Aurelio M. Umali, Chairperson of these local special bodies, presided over the meeting. The said meeting was attended by regular members of the councils, including the National Government Agencies (NGAs) and the accredited Civil Society Organizations (CSOs), and Department Heads of the Provincial Government of Nueva Ecija.

In his opening message, Governor Umali stated that the purpose of the meeting is in compliance with the provisions of the Local Government Code as the local special bodies were mandated to conduct the meetings. He also mentioned that the election has just been concluded and is about to get a fresh start. As he said, "Everybody is expected to readily start with the programs and projects to serve our respective constituencies."

After all the presentations, Governor Umali thanked all the council members for their participation in the meeting. 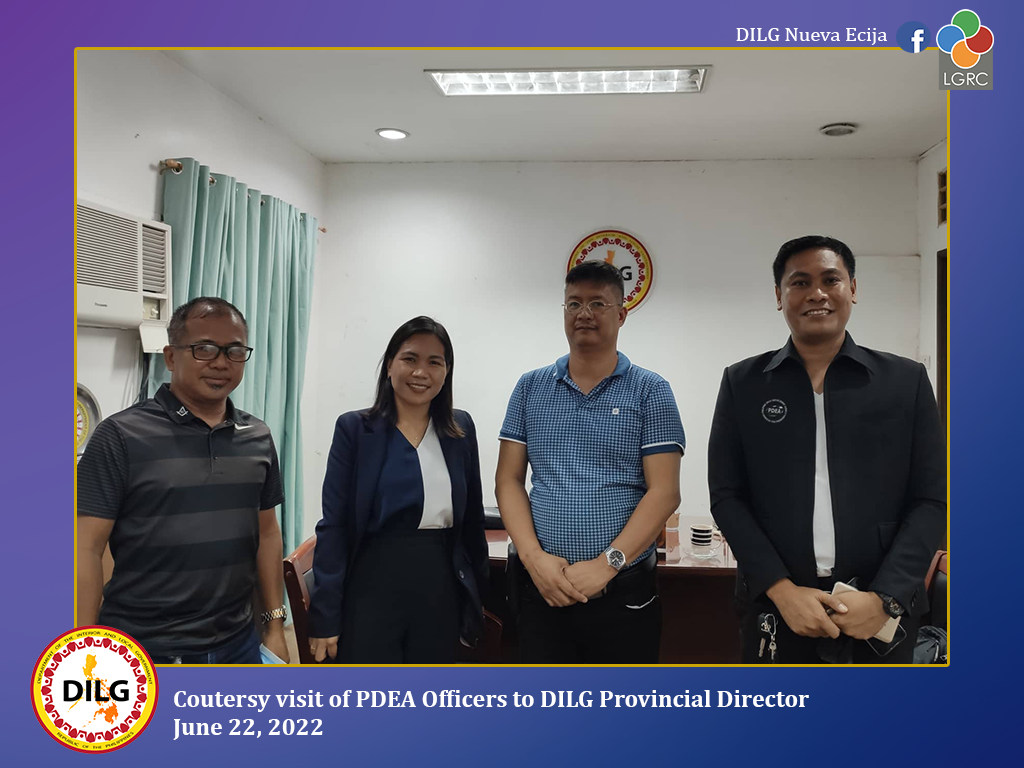 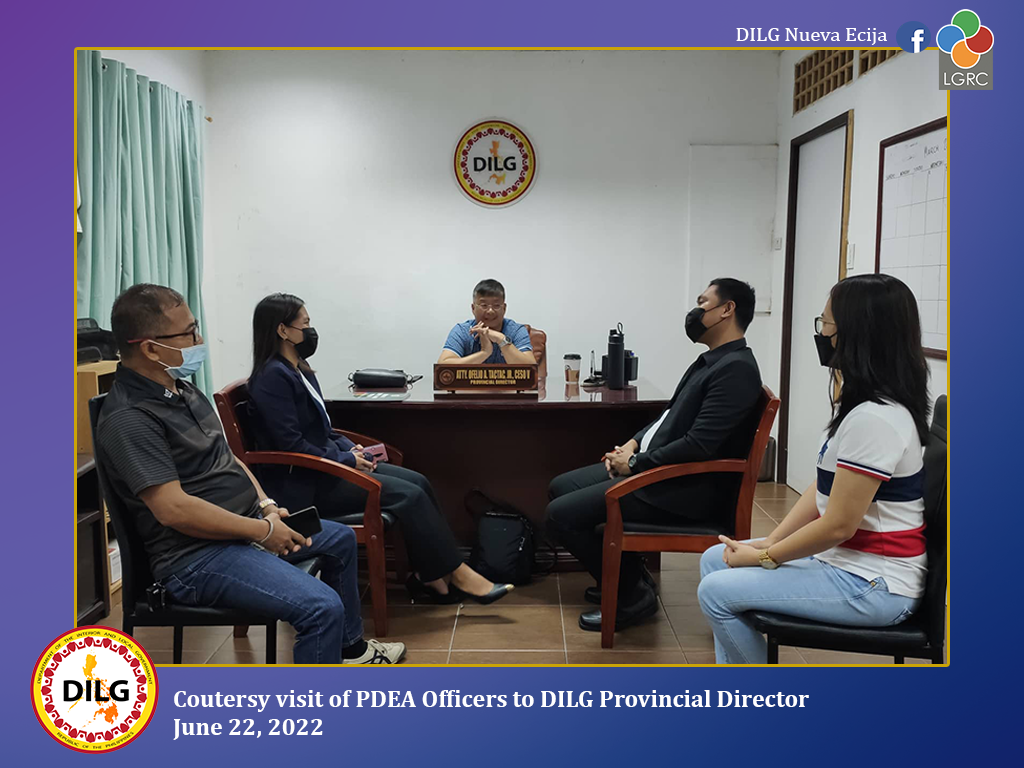 IA V Macairap shared their experiences in the implementation of drug clearing operations in the province, including the frequent concerns on the documentary requirements of the barangays to be declared as drug cleared barangay. As a response, PD Tactac said that DILG NE will be working closely with the DILG Field Officers on this. He also mentioned his plans of working out the formulation of POPS Plans in the LGUs.

To conclude, IA V Macairap and IA III Abejuela expressed their gratitude on the time given by PD Tactac to meet them. 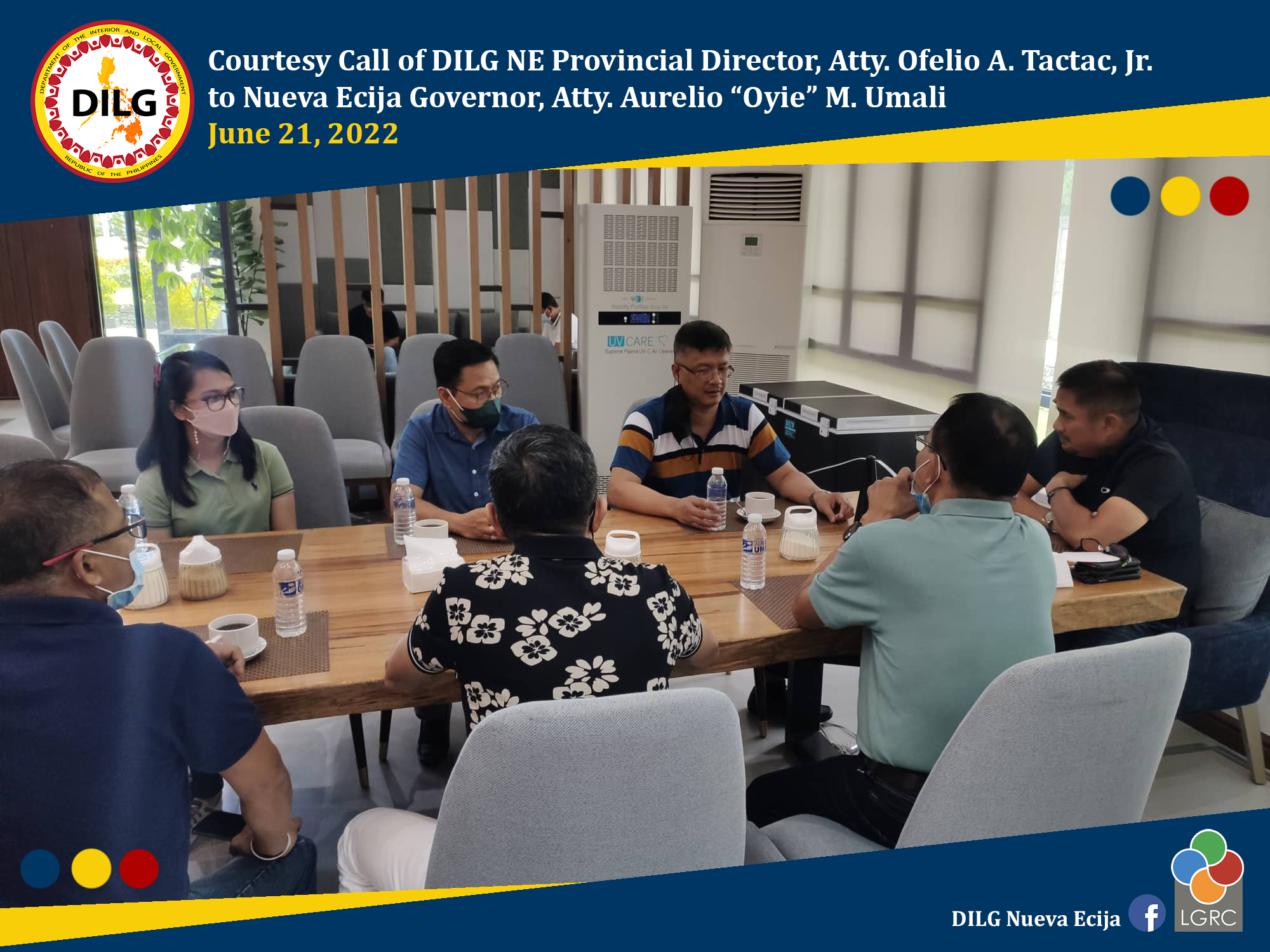 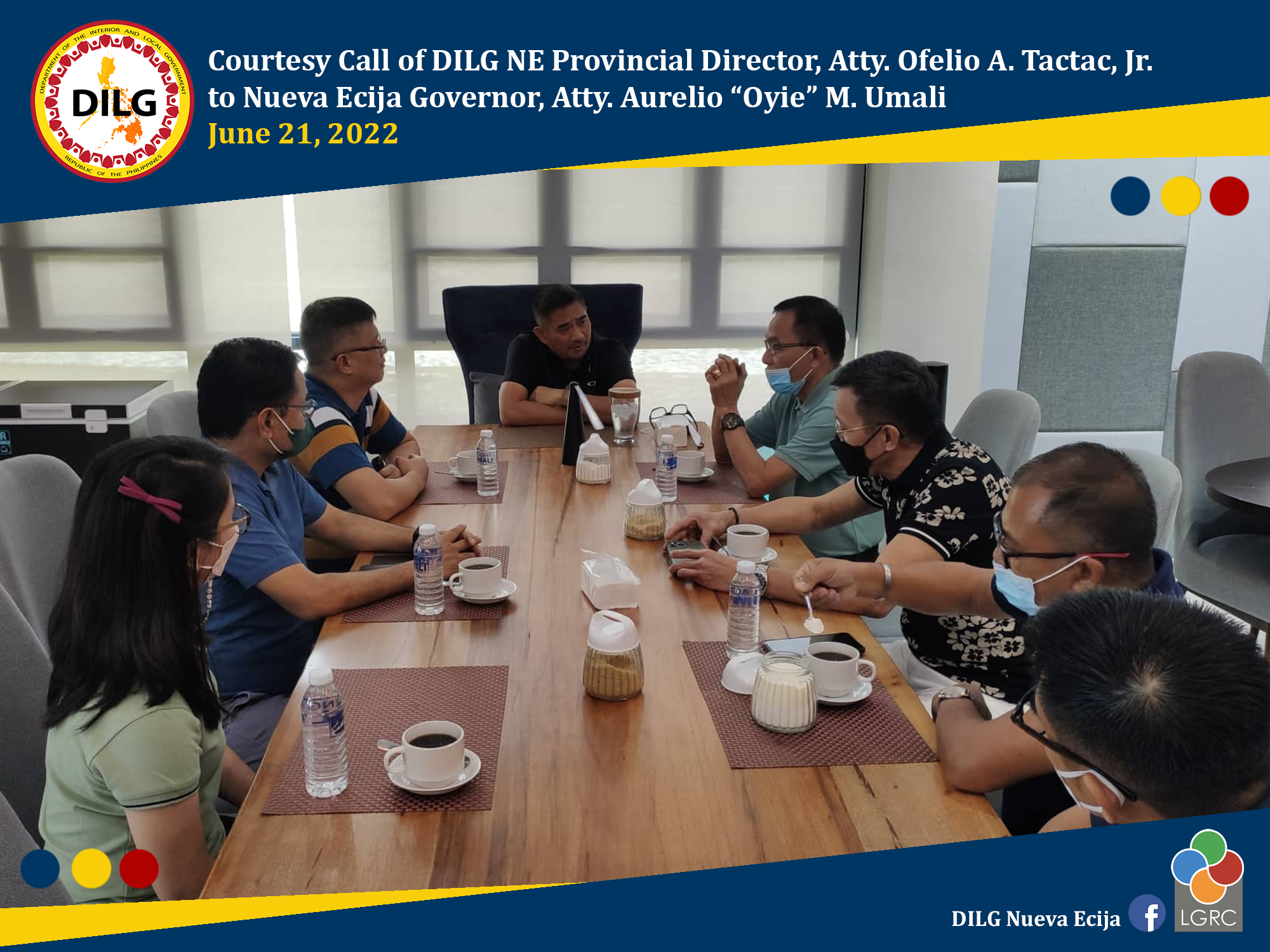 Governor Umali welcomed PD Tactac and expressed his optimism of working with the DILG under PD Tactac's leadership. He also discussed three (3) of his plans in the province - the creation of a Task Force for Environment, concerns on Quarry Sites and Ownership, and the Pangako Watch.

On the other hand, PD Tactac discussed with Governor Umali the Provincial Assessment Result of the City/ Municipal Peace and Order Councils and the steps on how the DILG and the Provincial Government may effectively help the LPOCs, especially those with low functionality.

Towards the end, Governor Umali thanked PD Tactac for visiting him, to which PD Tactac replied that the pleasure is his. PD Tactac also had the opportunity to meet with former Nueva Ecija Governor, Hon. Czarina D. Umali, who warmly welcomed the new Provincial Director. 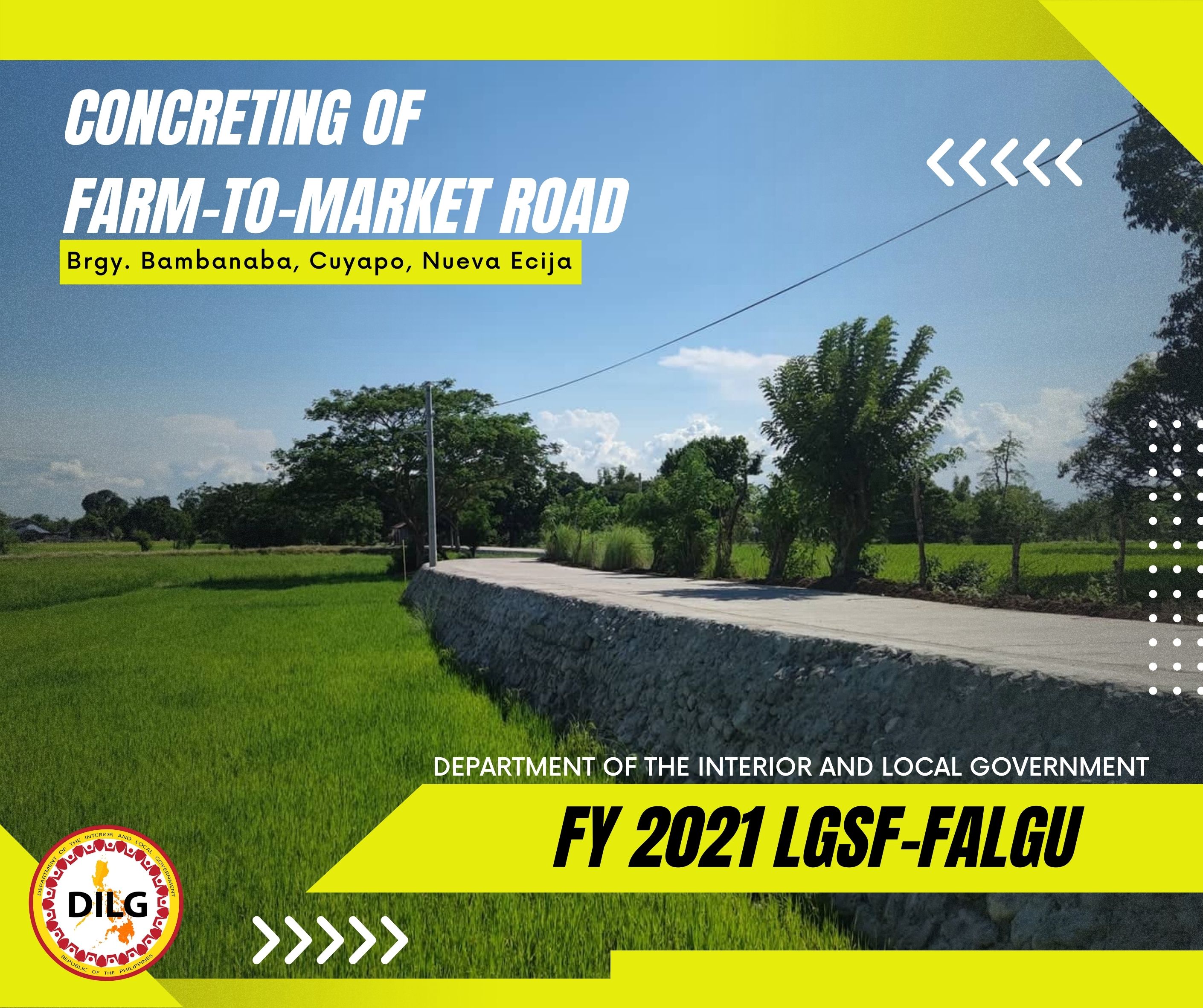 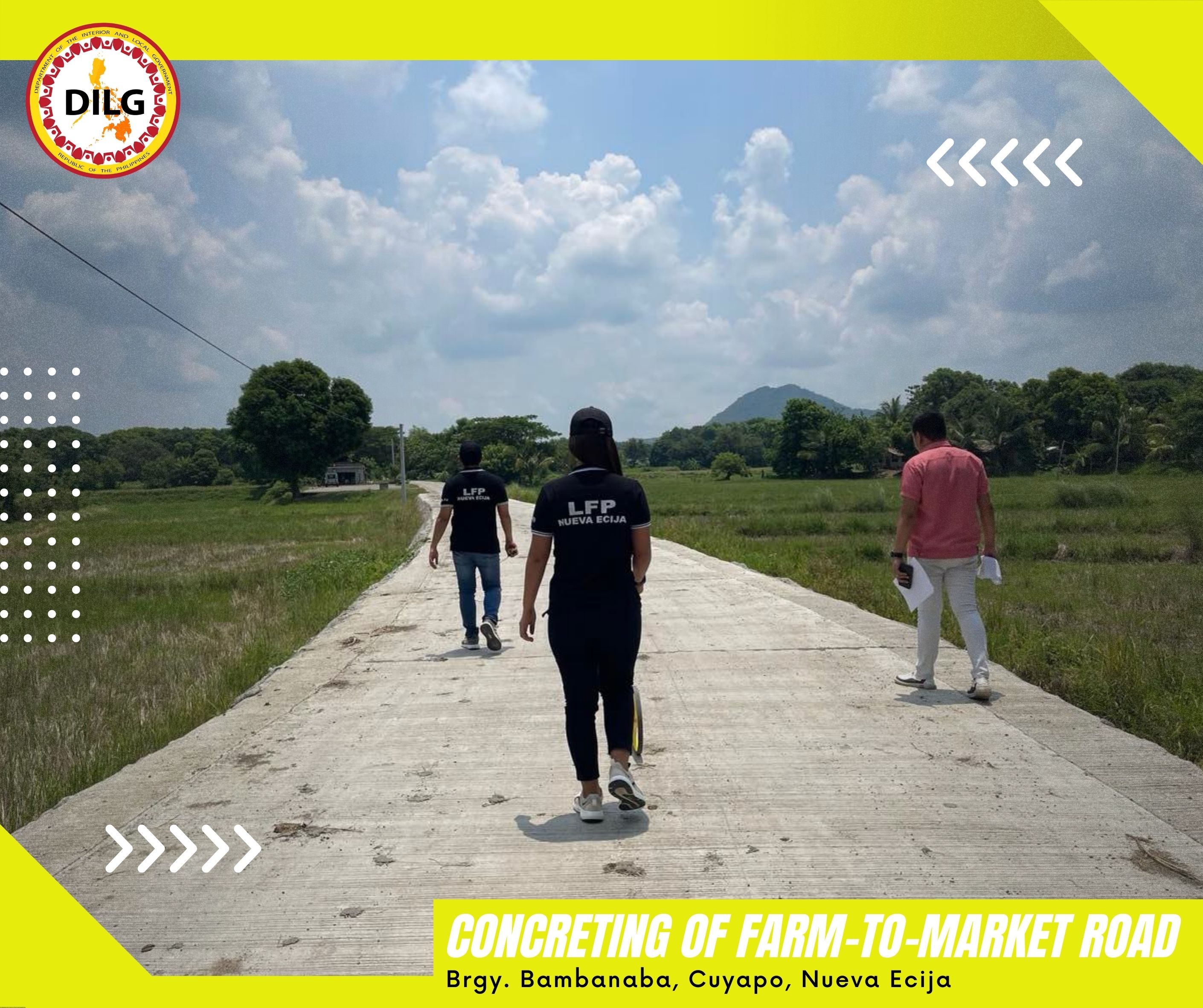 The aforementioned project, with an allocation of Ten Million Pesos (Php10,000,000.00), is at 97% completion rate. The concreting of the road is intended to benefit not only the residents of Brgy. Bambanaba but also motorists from neighboring barangays, by boosting the local economy through increasing road accessibility and facilitating transport of goods and services. The purpose of the inspection was to ensure that the project was executed according to approved plans and specifications.

The LGSF-FALGU Program aims to make a significant difference in the efforts of LGUs to build and improve local infrastructure in order to provide basic services to their constituents. 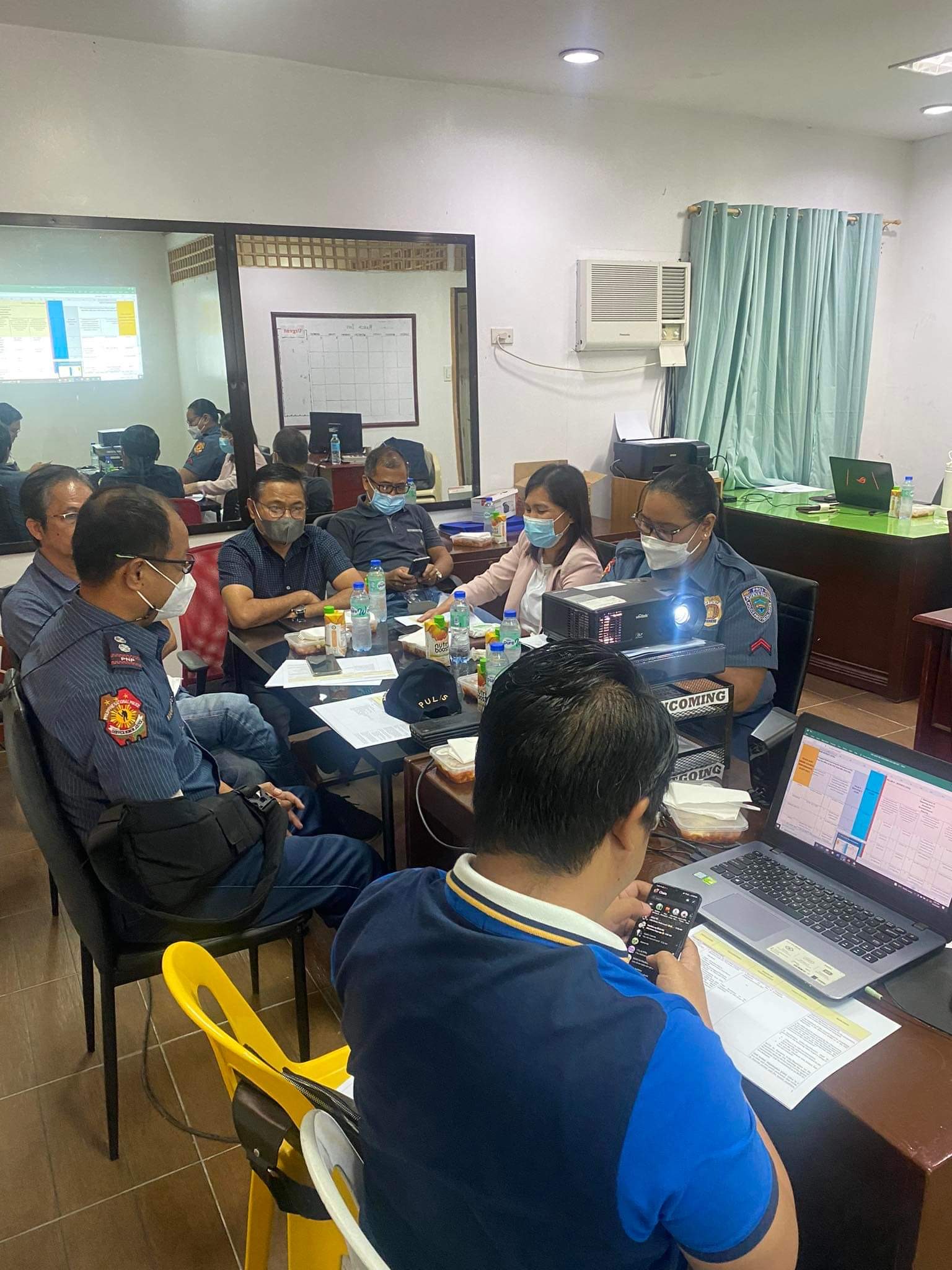 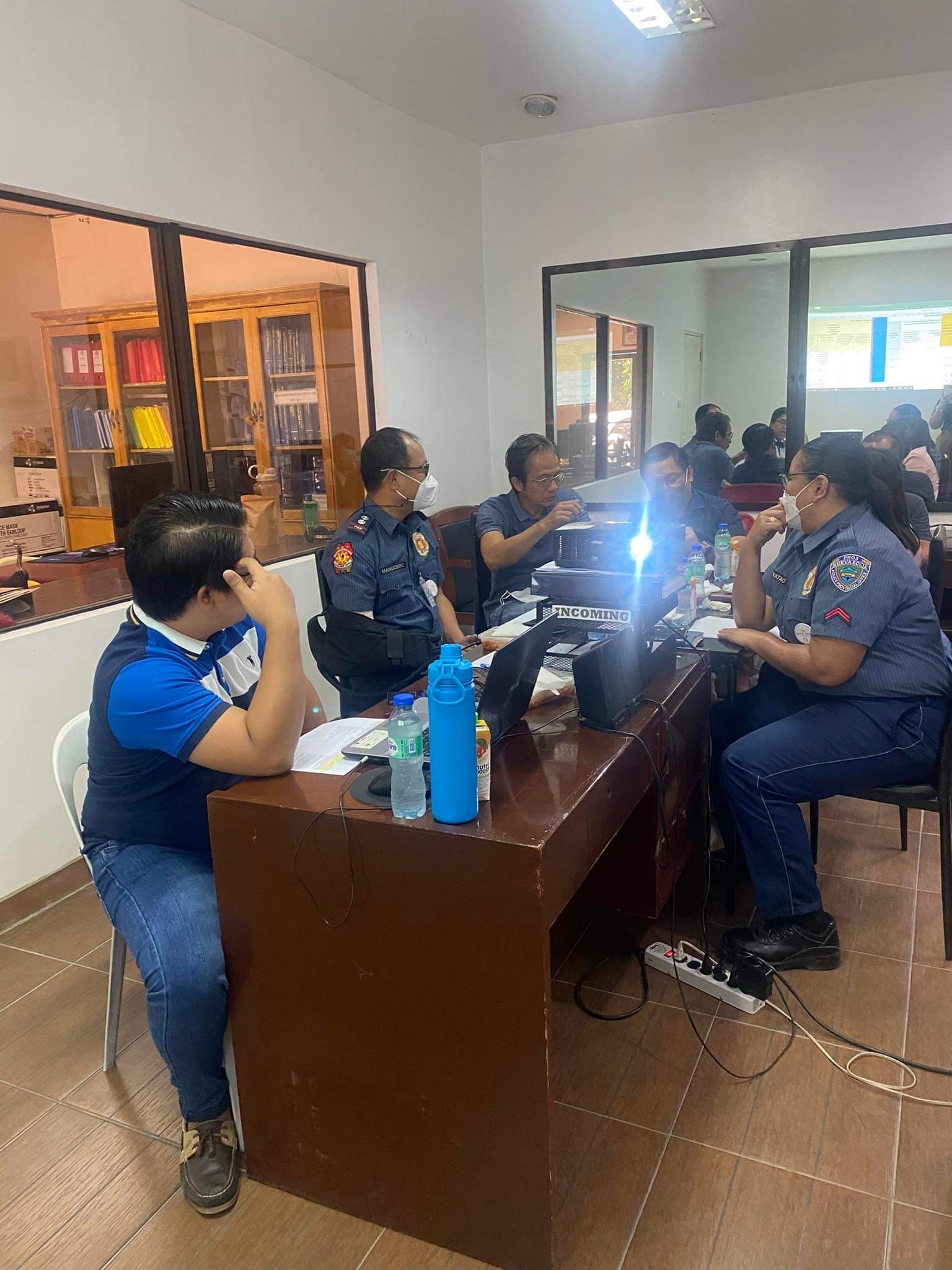 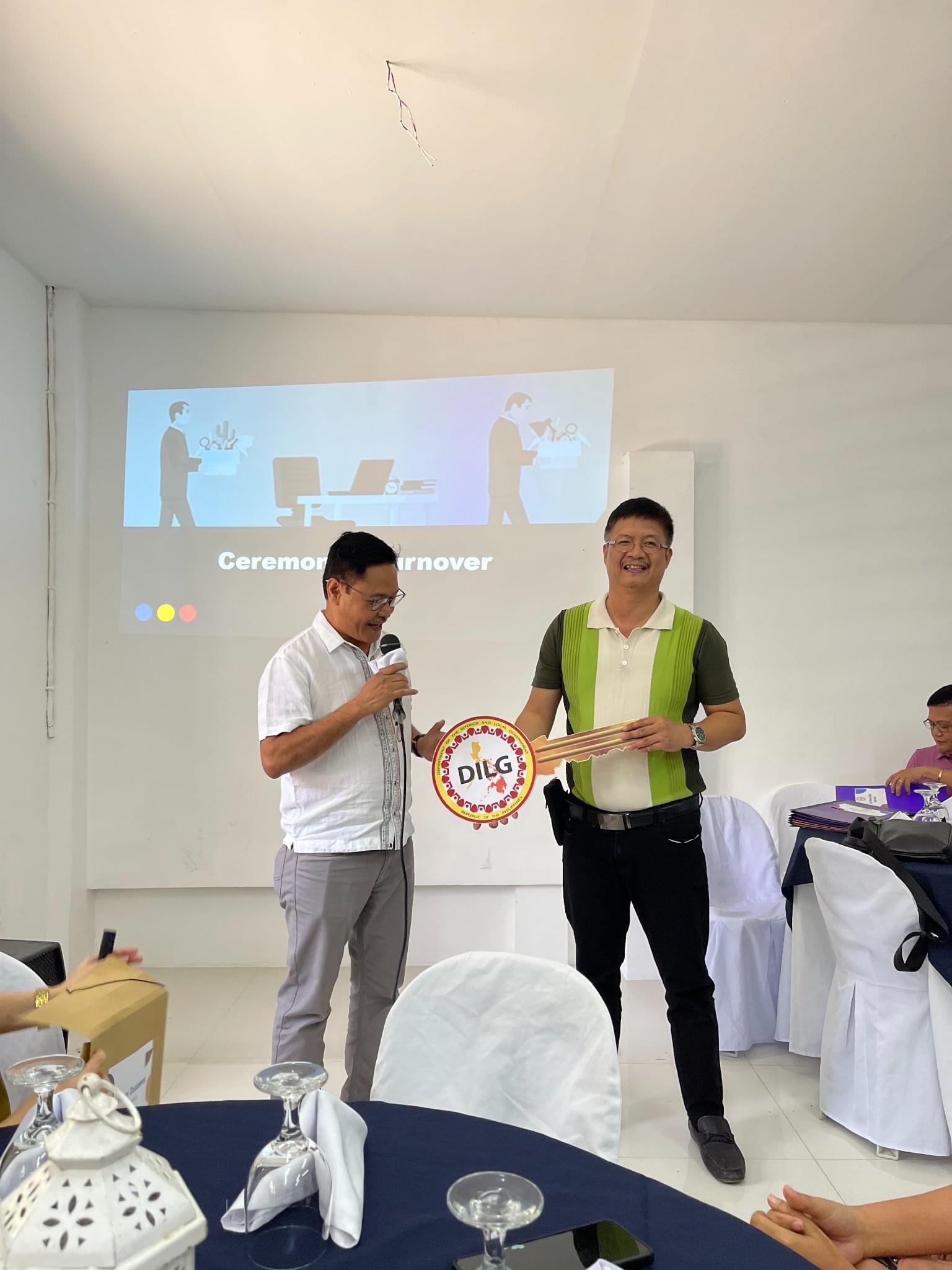 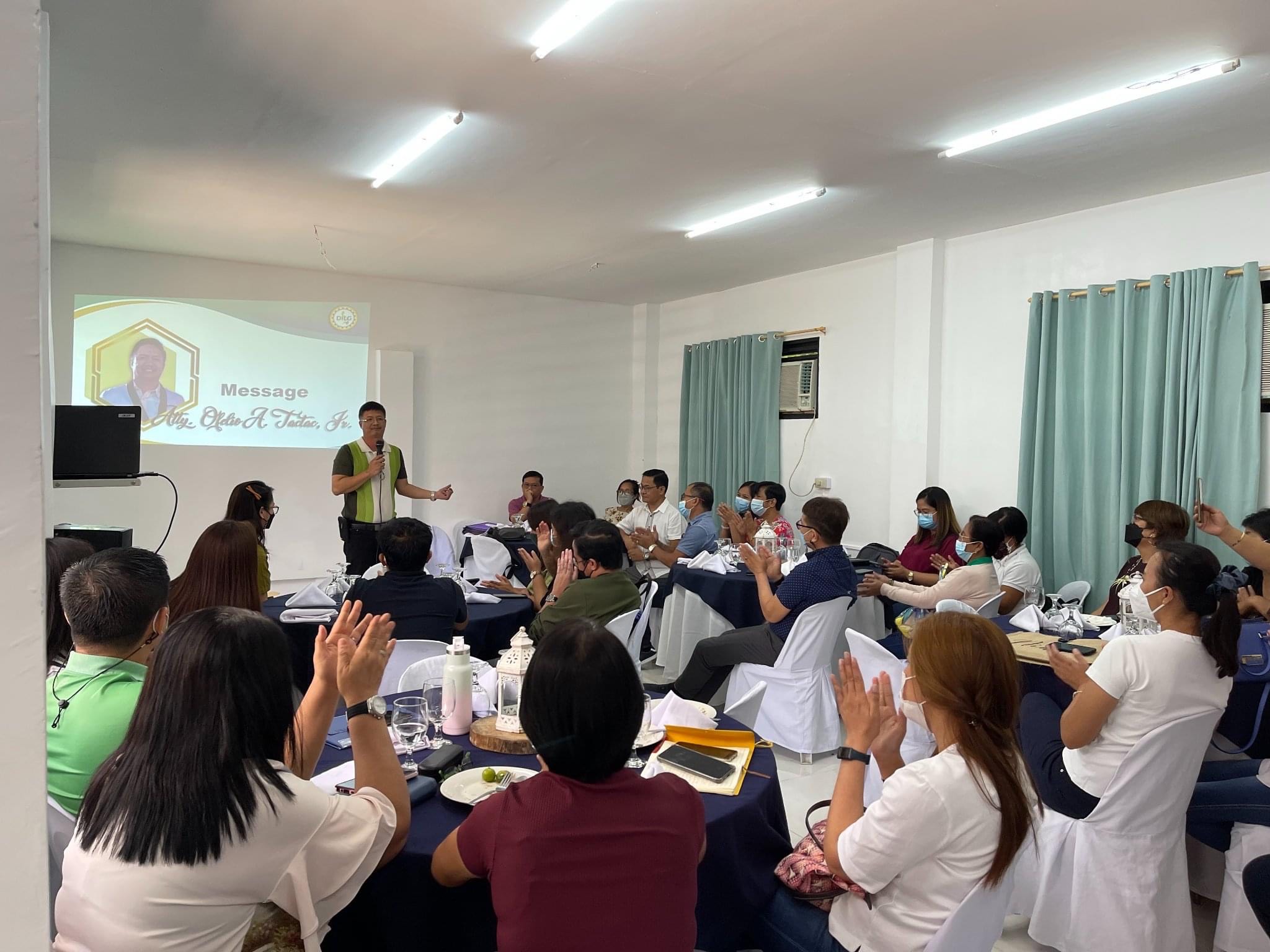 In his acceptance message, PD Tactac shares his early journey in the Department. He also expressed his appreciation to everyone and urged all the personnel of DILG Nueva Ecija for their full cooperation and support towards a new beginning.

The turnover ceremony was attended by the City/Municipal Local Government Operations Officers and Provincial Office staff. Accompanying PD Tactac, on the other hand, was LGOO VII Dennis A. Daquiz (Cluster Team Leader) and DILG Aurora personnel.