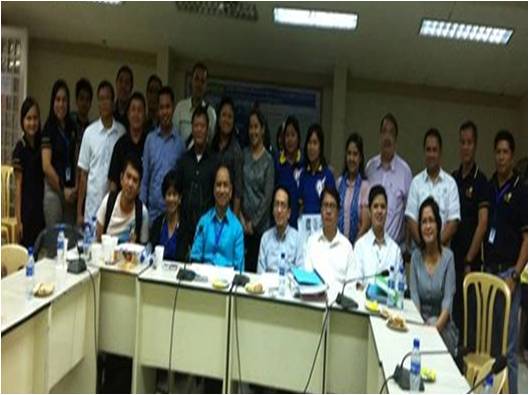 Spearheading the conduct of the Synchronized Barangay Assembly Day in Central Luzon, DILG R3, identified Barangay Pag-asa, Dinalupihan, Bataan as its Regional Showcase Barangay for the 1st Semester of 2014.

Punong Barangay Basilio S. Layug comprehensively delivered his State Of the Barangay Address (SOBA) highlighting their CY 2013 accomplishments. Likewise, the limitations and problems encountered in the performance of their specific mandates as well as their immediate needs were reported. He also made mention of the line-up of activities and projects of the council for the succeeding months.

Director Florida M. Dijan, Regional Director, DILG R3, in her inspirational message, expressed her appreciation and lauded the Local and Barangay Officials for adhering to their mandates and coming up with such important and very timely activity. Likewise, she acknowledged the presence of the representatives from other NGAs namely: the DILG Family (BFP, PNP, BJMP); Office of Civil Defense, National Irrigation Authority; and the Department of Public Works and Highways. She concluded her message by sharing a short poem: “Mga batong watak-watak, sabog-sabog kapag pinagpatong-patong nagiging isang moog, ganyan din ang mamamayan at pamahalaan, kapag nagkaisang loob, ang sisisirin masi-sisid, ang aabutin maabot”.

Also gracing the activity were Hon. Albert Raymond S. Garcia, Governor of Bataan and his eldest sister Hon. Maria Angela S. Garcia, Municipal Mayor of Dinalupihan, together with her Local Officials and Functionaries.

Mayor Maria Angela S. Garcia, in her response, assured the council and the assembly members that her administration shall provide the necessary assistance to address the gaps in implementing the proposed projects and activities of the barangay.

Governor Albert Raymond S. Garcia informed the community of the on-going initiatives of the Provincial Government: First, on increasing employment opportunities by being an investment hub thru the Freeport Area of Bataan; Second, the on-going construction of flood control projects in the Municipalities of Dinalupihan & Hermosa in Bataan and Lubao in Pampanga. Lastly, he also informed the public that the problem on increasing electric cost will be addressed soon with the repair and full operationalization of the power generating plants in Bataan.

The first part of the activity was culminated with the turn-over of the State of Barangay Governance Report of  Barangay Pag-asa to Mayor Garcia and RD Dijan.

Pursuant to Proclamation No. 260 dated September 30, 2011 all barangays in the Philippines, are required to call for a Barangay Assembly at least twice every year and deliver their State of the Barangay Address (SOBA) to their respective constituents concerning matters provided by Section 397(b) Chapter VI of the Local Government Code: Accomplishments and Financial Report from the past six months and updates on 2014 on-going programs and projects.

The Barangay Assembly will also serve as a venue or platform for the assembly members to raise issues and concerns affecting the community, as well as for advancing proposals and recommendations to improve the quality of service of the barangay officials.