The Sanggunian Information System (SIS) was installed by DILG Region 3 SIS focal persons to the municipality of Minalin, Pampanga on February 28-29, 2012.  Minalin Mayor Arturo Naguit through Vice Mayor Arturo Yambao and the Vice Mayors’ League of Pampanga requested the DILG to install the SIS and conduct a briefing on the system as well as on the different programs of the Department.

During the activity, PD Angelina S. Blanco discussed the importance and benefits of the system.  Mayor Naguit, on the other hand, thanked the Department for the support it is continuously extending to the LGU.  He also assured the SIS team that the municipality will maintain the System until it will be completed and made available in order to further improve the delivery of services to their constituents.

The program is designed to provide the participants’ knowledge on the operational change agenda of the Department and eventually make them change agents/leaders of the Department. The activity also intends to explain the concept of change process; recognize the need for change and the urgency in which change needs to happen; recognize and discuss the DILG’s Change Agenda; Identify Priority Programs of the Department vis-à-vis the priority governance of the Aquino Administration; identify criteria and roles of Change Agents/Leaders; define and prepare plans on how to execute the DILG Change Agenda at the field level.

The activity, which was attended by 237 participants also made the venue for the presentation and evaluation of the 2011 Region 3 accomplishments on Department’s program outcomes.

Regional Director Florida M. Dijan, in her opening message, expressed deepest gratitude to the Central Luzon Team’s achievements over the past year. She stressed that 2011 has been a very busy year but 2012 shall be busier. Policies change over time and the changing roles of LGOOs should meet the new expectations of DILG’s clientele. She added that our activities next year should be contextualized within the growing times to meet the evolution of needs and the metamorphosing demands of the LGUs. She mentioned also that the DILG Region 3 should have a balanced external and internal program due to our changing environs.

On the other hand, ARD Jonathan Paul M. Leusen, Jr. presented and discussed thoroughly the topics from Session 2 to Session 7. Session 1 was about the reason for Change. The Audio Video Presentation of the DILG Reform Agenda was put on view. Individually, participants reflected on the questions: Why change? What is this for? Will this benefit my family? Why am I doing this? What will the future look like for me, my family, the communities I serve, the country? Is it worth pursuing? They reviewed DILG’s vision, mission, core values, goals and objectives and had a reality check on “Where are we as a Department in relation to these? What has worked? Where are the gaps?” Participants after the said workshop, shared their answers to the group.

Sessions 2-7 were about Introduction to Change Management and Theory of Change Objectives, Aligning with the Outcome, Creating the Output, Developing a Pathway of Change per Output, Identifying Interventions, Developing Indicators and Narrative and Presentations. 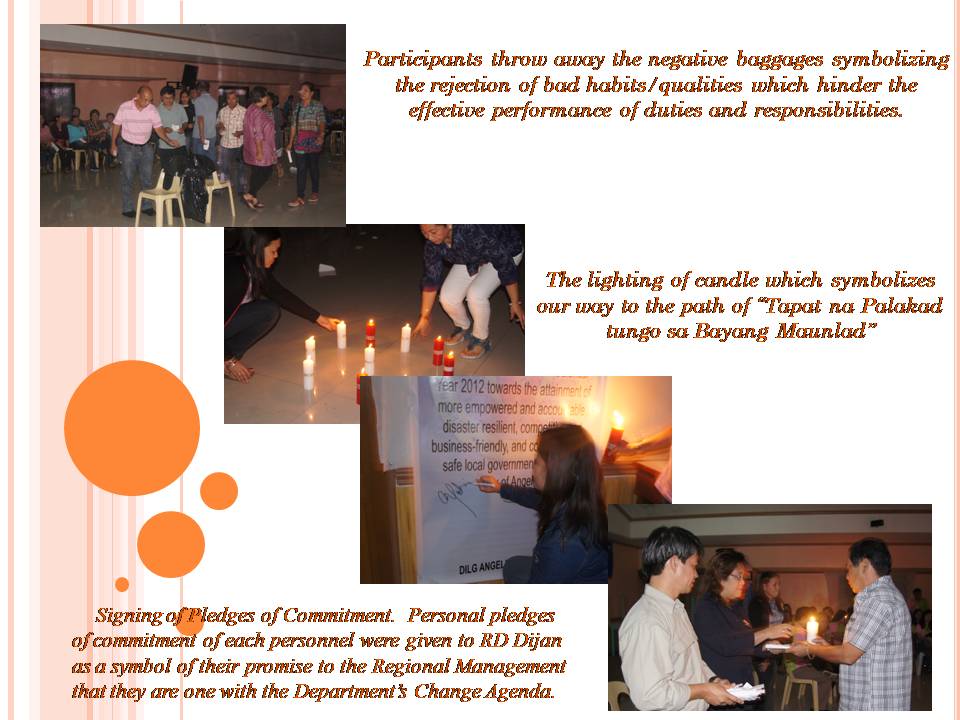 The activity was aimed to reflect on and let go of the negative baggages and do away with bad habits. In a piece of bond paper, the negative work attitude or bad habits that hinder good performance were written. In another piece of paper the positive work attitude, good values that will be committed to be a P.A.R.T of the successful implementation of DILG R3 Change Management Process in 2012 were written. 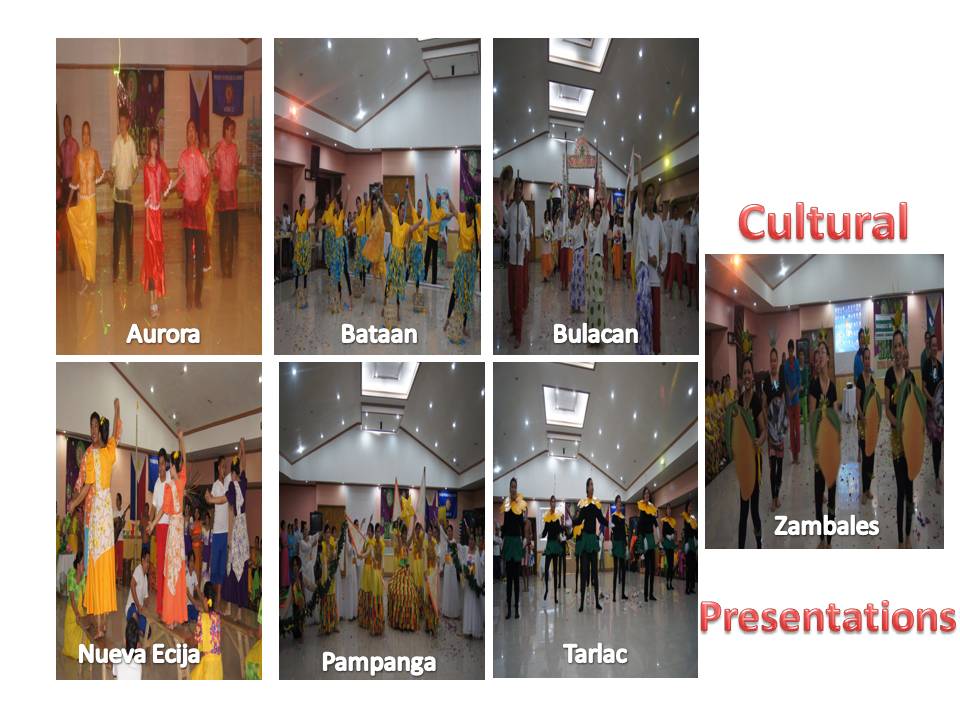 The municipality of Sto. Tomas, Pampanga through the leadership of Mayor Joselito Naguit held a groundbreaking ceremony of the LGU’s approved project under the Local Government Support Fund (LGSF) on February 29, 2011. The project is the Improvement and Concreting of Balangcas Road which amounted to P700, 000.

DILG Pampanga Provincial Director Angelina S. Blanco graced the event and said that the Department will continuously support the LGU in all its endeavors in order to realize the vision of having excellent local governments. She likewise congratulated the officials of the said municipality for being the first to hold a groundbreaking ceremony in the province.

Sto. Tomas, Pampanga is one of the 137 LGU recipients of LGSF in Region 3.

0121 (Disaster Risk Reduction Management Act of 2010), RA 9729 (Climate Change Act) and RA 6975 (DILG Act) mandate the Department of the Interior and Local Government as Vice-Chairperson on Disaster Preparedness in the NDRRMC to build the capacities of LGUs to effectively address and mitigate the impacts of disaster and calamities by formulating plans, policies and programs.


In response to this, the DILG initiated and developed a comprehensive program entitled Enhancing LGU Capacity on Climate Change Adaptation and Disaster Risk Reduction Management. It has three (3) components namely: (1) Diagnostic- evaluation, assessment and checking of capacity and resources of LGUs in terms of disaster preparedness; (2) Institutional Capacity- orientation-briefing on DRR/CCA, Mainstreaming DRR/CCA into the Local Processes and Systems; and (3) Infrastructure Audit and Financial Resources.


This year, DILG R3 has targeted three (3) pilot LGUs in the Region with which to conduct two locally funded trainings on Mainstreaming DRR/CCA into local processes. The Province of Tarlac and its three LGUs –Tarlac City, Capas and Gerona are the first beneficiaries of this program.


The first activity was the Training on Rationalized Planning System held on January 24-25, 2012 at Maharajah Hotel, Angeles City. A total of 85 participants attended the activity to include the Sangguniang Panlungsod/Pambayan Chairman on Appropriations, four (4) representatives from each Sectoral Committees and DILG Personnel. It was designed to enhance the pilot LGUs capacity on Disaster Risk Reduction and Climate Change Adaptation by mainstreaming DRRM/CCA into Local Development Plans particularly on their Comprehensive Land Use Plan (CLUP) and Comprehensive Development Plan (CDP).


One of the highlights of the activity was the MOA signing between DILG R3, Bureau of Fire Protection Region 3 and the three pilot LGUs of Tarlac represented by their respective LCEs, on the provision of subsidy fund that shall be used for the procurement of early warning systems, preparedness equipment and other equipage.
Another component of this activity was the Community-Based Disaster Risk Management (CBDRM) Training held on January 26-28, 2012 at the same venue. This training was designed to capacitate one representative from each sectoral group, Punong Barangay and Kagawad from the five identified barangays from each LGU which are most vulnerable to disasters, on CBDRM. It was divided into four modules: (1) Municipal/Barangay Disaster Situation; (2) DRRM, CBDRRM and Adaptation; (3) Preparedness and Mitigation Risk Reduction Measures; and (4) Flood Preparedness and Mitigation Planning. Resource Speakers from Center for Disaster Prevention Foundation Inc. were invited to discuss these modules. Furthermore, two representatives from Bureau of Local Government and Development were present to monitor the activity and share their insights.


As a concluding activity, participants were required to make action plans and produce different tools (Hazard Mapping, Historical Timeline, Social Venn Diagram, 3Ks and Historical Profile) which can be useful in the formulation of their DRRM Plans.