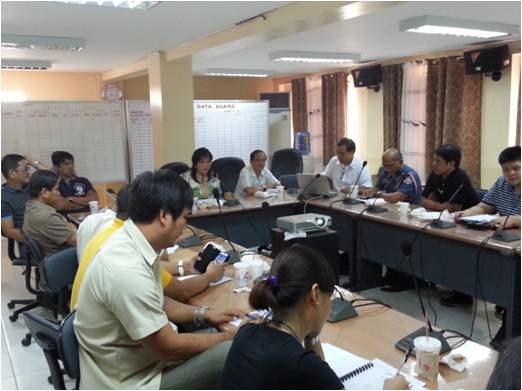 Consistent with the National Disaster Risk Reduction Management Plan (NDRRM Plan), the Department of the Interior and Local Government Region 3 as Vice-Chair on Disaster Preparedness, in coordination with the Office of Civil Defense R3, convened the lead agencies in charge of the said DRRM Priority Area.


Presided over by RD Florida M. Dijan, DILG R3, the meeting was conducted last February 13, 2013 at the OCD R3 Conference Room. It was attended by representatives from the following NGAs: PIA, DENR-EMB, BFP, PNP, LTO, NEDA, DBM, DOH, DepEd, CHED, DTI, OCD, DILG.  The occasion served as a preliminary meeting of the lead agencies for the formulation of a Regional Disaster Risk Reduction Management Plan (RDRRM Plan) aligned with the NDRRM Plan.

Highlights of the meeting include the presentation of the initiatives of each agency relative to disaster preparedness.  MED Chief Lerrie S. Hernandez presented the criteria and the implementing guidelines of the Department’s Seal of Disaster Preparedness (SDP) which was initially administered to LGUs along the Pampanga River Basin. The result of the SDP was also presented to show the DRRM gaps of priority LGUs.

OCD R3, on the other hand, presented a timeframe in the formulation of the RDRRM Plan which will be pilot tested in Central Luzon.  The timeframe was crafted by the NDRRMC with the help of consultants from the Japan International Cooperation Agency (JICA).