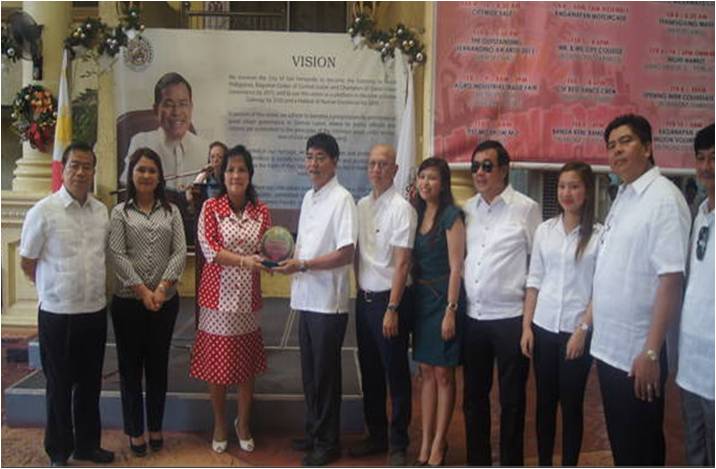 The City of San Fernando once again, was hailed as the Regional Winner in the Component City Category of the 2012 Local Legislative Award (LLA).  The award was presented by DILG Regional Director Florida M. Dijan, assisted by DILG Pampanga Provincial Director Myrvi M. Fabia during the city’s Monday Flag Raising Ceremony on February 11, 2013 at Plaza de Arrozal, City of San Fernando, Pampanga.

The award accords official recognition to a Sangguniang Panlungsod or to a Sangguniang Bayan that excels in the enactment of ordinances or resolutions and ultimately contribute to the attainment of desirable socio-economic and environmental outcomes.

Since its launching in 2006, the city consistently emerged as winner, both in the Regional and National levels.  At present, the city is vying for the National Award and hopefully, a Hall of Fame Award.

In RD Dijan’s message, she congratulated not only the Sanggunian but also the entire city under the administration of Mayor Oscar Rodriguez for having bagged not only the LLA Award but also most of the DILG’s awards. She acknowledged the strong coordination and cooperation between the two branches of the city government which resulted to a responsible local legislation and administration.

Mayor Rodriquez, in his closing remarks thanked RD Dijan for the untiring support of the Department in all the undertakings of the LGU. He stated that the remarkable accomplishment of the Sanggunian can be attributed to the formulation of a Legislative Agenda that complements the 8-Point Executive Agenda which was consolidated into what is known as the Executive-Legislative Agenda.