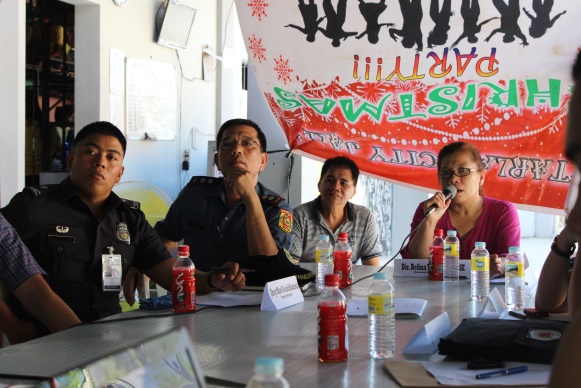 The meeting was attended by members of the DILG family such as Mr. Efren Rodriguez of the National Police Commission (NAPOLCOM), PSUPT Emmanuel G Nunag of the Tarlac Provincial Police Office (TPPO), FCINSP Mary Anthonette Buenconsejo of the Bureau of Fire Protection (BFP), and SJO3 Isabel M Pantig and JINSP Mark Gerald Bautista of the Bureau of Jail Management and Penology (BJMP) to represent their respective agencies.

Before the meeting proper, JINSP Bautista provided some tidbits on the activities of the detainees in the Tarlac City Jail particularly the weaving of water lily baskets for export.

As a component of the regular agenda, the members of the DILG family gave updates on their programs in peace and order and public safety for the agencies under the interior sector as well as some of the activities of the local government sector.

Updates from the interior sector include the continuous implementation of Oplan Sita, Police Community Relations and other innovations by the PNP. On the part of the BFP, updates include the serviceable and unserviceable fire trucks in the province, the recorded fire incidents during the last quarter of 2015 and OPLAN PAALALA and IWAS PAPUTOK. BJMP on the other hand provided statistics on congestion percentage and personnel complement in three of the Province’s detention facilities such the Tarlac City Jail and the Camiling and Paniqui Municipal Jails which are all highly congested at 1,200 percent.

For the local government side, PD Herman shared some of the updates on the newly disseminated schedule for the conduct of the Lupong Tagapamayapa Incentives and Awards (LTIA) while LGOO II Aimee Lacayanga discussed the salient features of MC No. 2015-128, Guidelines on the Formulation of Peace and Order & Public Safety Plan (POPS P).

After the updates, PD Herman once again thanked the members of the DILG family for gracing the meeting and cited that the next series of meetings are eyed to be held during the City and Municipal Management Coordinating Committee meetings in the future. LGOO II Bryan N. Rivera