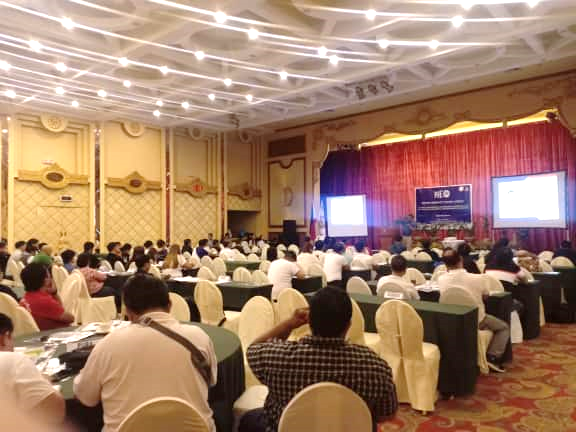 In order to acquaint the elected officials on legislative process, the Department of Interior and Local Government (DILG) Region III conducted a three-day training on Development Legislation: Honing Competencies and Enhancing Governance of LGU Officials for Optimal and Responsive Legislation, under the Newly-Elected Officials (NEO) Program, on March 4-6, 2020 at Fontana Leisure Park, Clark, Pampanga.

The activity was participated in by Vice Mayors and Sangguniang Bayan Members from 39 LGUs of 3rd to 5th class Municipalities in the region.
In her message, DILG-III Regional Director Julie J. Daquioag recognized the importance of how local legislators enact laws and regulations that respond to the needs of the people. She hoped that the training will serve as a venue to raise their concerns with regard to issues and opinions on legal matters.
On the other hand, Assistant Regional Director Jay E. Timbreza, encouraged the participants to sharpen and enhance their legislative skills to mold champions in the field of local legislation. He also hopes that these fostered champions will share inspirational and success stories of their LGUs in the future.
Meanwhile, LGCDD Chief Ener P. Cambronero called on to the participants to have a harmonious relationship with their respective local chief executives in order to have a progressive and inclusive growth in their LGUs.
The three-day activity aimed to shape local legislators in crafting policies that would further make LGUs competitive, competent and responsive institutions for development. Likewise, it targets to deepen their understanding and appreciation of the key concepts in local legislation and the legislative process.
The activity was graced by DILG Director of Legal and Legislative Liaison Office Atty. Romeo P. Benitez, Head of the City of Manila Legal Office Atty. Genaro Jose Emeterio S. Moreno, Jr., National Economic and Development Authority Regional Director Engr. Leon M. Dacanay, Jr., and Housing and Homesite Regulation Officer III, Department of Human Settlements and Urban Development Corazon O. Labay.
Aside from the local legislators, the said activity was also attended by DILG Central Luzon Cluster Leaders and Focal Persons.
The Development Legislation is under the component five of the Program for Newly-Elected Officials (Program for NEOs), a continuing intervention of the DILG through the Local Government Academy (LGA). In addition to this, the Department’s mandate is to strengthen and capacitate the local governments to deliver basic services efficiently and responsibly.