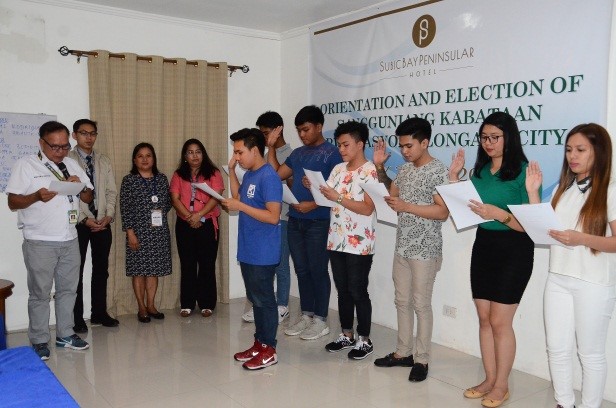 Promoting a congenial Sangguniang Kabataan Pederasyon Election in Olongapo City, DILG City Director Amada T. Dumagat encouraged the SK Chairpersons to unite for the welfare of the youth during their SK Pederasyon Orientation and Election on May 28-29 at Subic Bay Peninsular Hotel, Subic Bay Freeport Zone.

Before the election proper, CD Dumagat emphasized the importance of having harmonious relationship in every organization. “We will be having the election for you to choose your appropriate leader who will also consider the welfare of all the SK Officials, for all of you to raise the lives of the youth in Olongapo City."

Atty. Marvyn Garlan, Election Officer, reminded the SK Chairpersons to continuously learn about their duties as SK Officials. “The real measure of power is the exercise of constraint,” he added as he advised them to be cautious about what they say or post (in social media) to avoid misinformation since, with their authority, their voice matters.

To preserve the sanctity of votes, the Board of Elections Supervisors (BES) composed of CD Dumagat, as chairperson, Atty. Garlan and Acting Sangguniang Panlungsod Secretary Mildred Monje, together with the Panel of Observers, PNP Supt. Roger Tomen and Gerardo Cruz from Batang Gapo People’s Organization, observed the election proceedings. Also present was LnB Pres. Randy Sionzon.

The SK Chairpersons elected Jenny De Leon, as Chairperson, and Joshua Andrews Basa and Arjay de Dios as members of the Election Committee (EC). They facilitated the whole election process

All nominees were given 5 minutes to introduce themselves and speak their platforms.

All the 17 SK Chairpersons took part in the ballot, and the EC, under the supervision of BES, tallied all the votes.

City Mayor Rolen C. Paulino led the Oath-Taking Ceremony of the newly elected Pederasyon Officials. After his congratulatory message, he also enjoined them to properly perform their duties upon assumption

RA 10742 or the SK Reform Act of 2015 provides that there shall be an organization of the Pederasyon ng mga Sangguniang Kabataan in municipalities, cities and provinces.