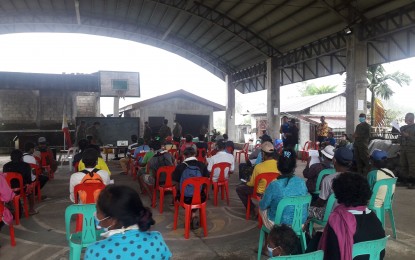 Of the 26 surrenders, 10 are former members of the Milisya ng Bayan (MB) and 16 are either couriers or contacts of the terrorist organization Platoon 4A4 of the NPA's Southern Tagalog Regional Party Committee (STRPC) operating in the boundary provinces of Aurora, Quezon, Bulacan and Nueva Ecija.

The 26 surrenderers pledged to withdraw their support to the Communist Party of the Philippines-New People’s Army (CPP-NPA) and took their oath of allegiance to the government.

Also present during the ceremony were Dingalan town Mayor Shierwin Taay, barangay chair Juanito R. Borreo, other local officials and stakeholders who are continuously supporting the program of the government to achieve lasting peace and development.

“Mayor Taay and the local officials played vital roles in encouraging the surrenderers to return to the fold of the law,” Rubio said.

He said the mass surrender was the result of the retooled community support program (RCSP) operation efforts by the Task Force to End Local Communist Armed Conflict (TF-ELCAC) with the special participations of local officials, stakeholders and the communities.

“Our government is open for dialogue towards peace engagement, to welcome the surrender of CPP-NPA members and their supporters as a way end the local communist armed conflict in our area of responsibility,” Rubio said.

He also assured of government assistance under the Enhanced Comprehensive Local Integration Program (E-CLIP) to all qualified CPP-NPA members and supporters who return to the fold of the law.

“Once again, I am appealing to other rebels to lay down their arms and surrender to authorities. Our government is here to really take care of you,” Rubio said.

The 26 surrenderers are now undergoing interview as part of the protocol to process their benefits under the E-CLIP program such as livelihood, medical, education, housing, and legal assistance.

One of the surrenderers said he was happy that they were given the chance to change their lives and correct the mistake they have committed due to deception of the CPP-NPA.

“We are also victims of the lies and deceptions of the CPP-NPA. We want peace. CPP-NPA is sowing fear and terror to the community and this is one of our reasons to surrender to proper authorities,” he said.

“I want to end armed conflicts so that no more lives would be sacrificed,” Mayor Taay said as he recalled with sadness the ambush staged against him by members of the CPP-NPA that resulted in the death of an enlisted personnel and wounding of a military officer in Sitio Singawan, Barangay Umiray, Dingalan town in this province some four years ago.

He also said the issue on poverty and lack of rightful information in the poor community must be resolved.

As a gesture of thanks to the surrenderers, the mayor, together with other local officials, led the distribution of food packs and initial cash assistance to them.

He said it is evident that the efforts of the government forces are geared towards sustaining peace and development in the area.

“The Army and the PNP are always ready to face any herculean task so as to carry on the spirit of service at all times,” he said.

Brig. Gen. Alfredo Rosario, commander of 7th Infantry Division, also expressed his appreciation for the actions taken by government troops to save the former rebels from further harm.

“As we all face an unseen common enemy, referred to as Covid-19, it is wise to unite and gear all efforts to a single strong direction,” Rosario said.

He gave assurance that the 7ID is ready always to serve and protect the people.

The surrender of the 26 former rebel supporters is the biggest number so far this year under the 7ID's areas of jurisdiction.