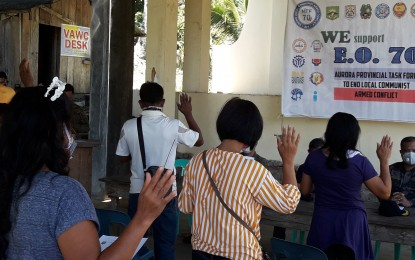 Fifteen supporters of the Komiteng Larangang Guerilla (KLG) Sierra Madre of the Communist Party of the Philippine-New People’s Army (CPP-NPA) surrendered to government troops in Barangay Dianawan, Maria Aurora, May 30, 2020.

Rubio said that the surrenderers opened up about their dissatisfaction with the false promises of their leaders and the pattern of deception being done by the communist terrorists.

“I am encouraging you (surrenderers) to inform other Pamana members about the government’s efforts toward peace and development and explained to them that our government is open for dialogue to end the local communist armed conflict in this province,” Rubio added.

During the ceremony, the 15 surrenderers pledged to withdraw their support to the Communist Party of the Philippines-New People’s Army-National Democratic Front of the Philippines (CPP-NPA-NDF) and took their oath of allegiance to the government.

Maj. Rhoderick Bagunu, chief of police of the Aurora Police Station, gave his gratitude to the surrenderers wo are now on the side of the government.

“Makikita sa tinagal-tagal ngayon lang nangyari ang maraming nagbabalik-loob. Sana ay iparating din sa iba pang tao ang mabuting ginagawa ng gobyerno para sa ating bayan (We can see that for a longer period, it is only now that many returned to the fold of the law. I hope the good things that the government is doing to our town would be conveyed to other people),” Bagunu said.

“I am happy for their response and support to the government. Rest assured that we will continue to provide livelihood training and other development programs with the help of concerned government agencies and other stakeholders,” Mico said.

After the activity, the military troops distributed rice to the surrenderers and leaflets on the coronavirus disease 2019 (Covid-19) from UP Baler extension campus.