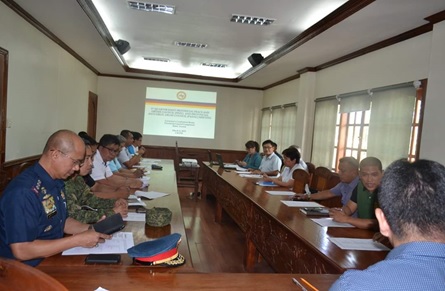 The agenda include updates on the Peace and Order Situation of the province which was presented by PCol. Cosme Abrenica, Sr., PNP-APPO Provincial Director. He presented the crime volume data of the province and their respective operational undertakings. PD Abrenica reported their accomplishments for the intensified campaign against illegal drugs in the whole province which include the conduct of Tokhang activities and police operations. For the Election Watchlist Areas, PD Abrenica also reported that 3 municipalities have threatened barangays: Dingalan (Brgys. Dikapanikian and Umiray); Maria Aurora (Brgys. Villa, Decoliat, and Dianawan); and San Luis (Brgys. Dimanayat, Diteki, and Dikapinisan) – all under Category 2 or areas with presence of high risk threat from the armed groups. 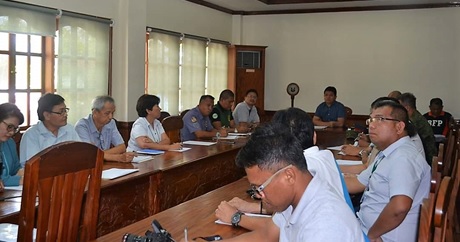 PD Abrenica also shared updates on the cocaine brick that was found by a construction worker along the shoreline of Brgy. Reserva, Baler, Aurora last March 3, 2019. According to him, “The brick weighs about a kilo and wrapped in a black rubber plastic labeled with “Lexus”, similar to the brick recovered in Dingalan, Aurora last February 21, 2019. The brick has an estimated street value of PhP5,000,000.00. As to its source, the PDEA National Headquarters has not yet released any official statement if the brick was intentionally or unintentionally dropped from where it came from. Relative to the situation, we have already alerted the Chiefs of Police to intensify their monitoring in the area and also to closely coordinate with the barangay officials, particularly in coastal barangays”. During the Flag Raising Ceremony, the PNP presented a token of appreciation to the construction worker and invited the Punong Barangay of Brgy. Reserva to receive a Certificate of Recognition for his effort and cooperation to combat illegal drugs within the community.

Meanwhile, Capt. Roosevelt Cadiz, Intel Officer, 91IB, Philippine Army, presented the insurgency updates in the province. He informed that their areas of operations cover Aurora Province; three (3) municipalities of Nueva Ecija namely: Bongabon, Laur, and Gabaldon; and the 3 barangays of Alfonso Castañeda, Nueva Vizcaya. During their sustained military operations, Capt. Cadiz informed that there were sightings in Maria Aurora-San Luis; Gabaldon-Laur-Bongabon; Alfonso Castañeda, Nueva Vizcaya-Maria Aurora; Dipaculao-Nagtipunan; and Maria Aurora-Bongabon areas. Relative to this, Capt. Cadiz said that they are continuously intensifying their operations tomaintain peace and order in the province.

Atty. Ofelio A. Tactac, Jr., CESO V presented the Executive Order (EO) No. 01-2019 re: “Reconstitution of Provincial Peace and Order Council (PPOC) Composition”. PD Tactac informed that the difference of the present EO from the previous one is the inclusion of the PDEA as member of the Council and the PPOC Secretariat shall be assisted by the staff from the Governor’s Office. As specified in the EO, the Office of the Governor, Provincial Budget Office, and PDEA are also included in the technical working group. The EO was unanimously approved by the body.

Mr. Joseph Soniel, Provincial Budget Officer, reported the status of Supplemental Budget. He said that the list of programs, projects, and activities (PPAs) under Peace and Order was only finalized last December 2018. He added that the total budget indicated in the plan is PhP3,1000,000.00, however, the Sangguniang Panlalawigan has only approved the amount of PhP1,000,000.00 last October 2018. According to Mr. Soniel, “The additional budget amounting to PhP2,1000,000.00 was already approved by the PDC and already adopted by the SP. Hopefully, the Council can get the whole amount of the additional budget from the 2018 savings in order to implement various PPAs related to peace and order”.

For other matters, FCI Jonathan A.  Glemao, BFP Deputy Provincial Fire Marshal, gave an update on the fire incident that happened at about 10:00 PM last March 2, 2019 at Brgy. 02, San Luis, Aurora. He said that the incident was on 1st alarm and the affected structure is a residential building with 3 bedrooms, owned by LGU-San Luis and presently used as Reformation Center Dormitory. The occupants during the incident were students from Brgy. Dibut. No reported injured or casualty, however, the estimated damage is about PhP700,000.00. Two (2) fire trucks responded and the incident was declared fire out at around 10:50 PM. Based on the BFP initial investigation, the fire incident was caused by a faulty electrical wiring (electric fan).

In closing, Acting Governor Angara, expressed his appreciation and gratitude to each member of the Councils for all their support in the promotion and maintenance of peace and order. He said, “This will be my last meeting as your acting governor and PPOC chairperson but I will see to it that the additional fund for the implementation of PPAs related to peace and order shall be expedited. Let us always partake in the thrusts of our government through our combined efforts in supporting the provincial government’s initiatives in maintaining peace and order, safety, and security of the whole constituency”.