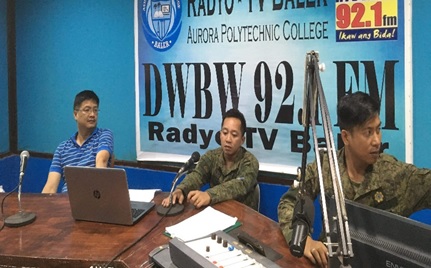 PD Tactac talked about the E-CLIP program which seeks to contribute towards achieving a permanent and peaceful solution to the communist insurgency problem by providing a wide package of assistance to former members of the New People’s Army (NPA) and Militia ng Bayan who returned to the fold of law and their immediate family members. He stressed that it is an offshoot to the Administrative Order 10 signed by President Rodrigo Duterte on April 3, 2018, converging the CLIP of the DILG and other programs of different government agencies, to facilitate the mainstreaming and re-integration of former rebels (FRs) to society. The program also covers former rebels who surfaced and yielded starting July 1, 2016 who will be provided benefits from the E-CLIP - in addition to previous benefits that they have received.

In closing, Atty. Tactac underscored that there is no future for members of the communist insurgency and other similar groups. They should surrender and be reintegrated in the community in order to have a brand new start, live a peaceful life, and be productive members of the community. The Department is closely working with the AFP, PNP, LGUs and other agencies to ensure the full implementation of the Enhanced Comprehensive Local Integration Program (E-CLIP).