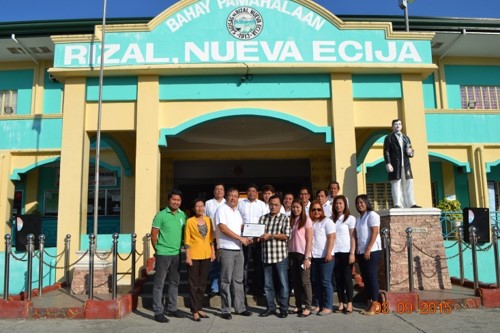 Rizal, Nueva Ecija – With the thrust in promoting child-centered Local Government Units towards a Child-Friendly Philippines: A Caring and Protective Society For, By, and With the Children; the Municipality of Rizal Nueva Ecija was conferred with the 2014 Seal of Child-Friendly Local Governance by the Council for the Welfare of Children (CWC).

The exemplary effort, support and commitment of the Local Government Unit of Rizal was recognized by the Local Chief Executive and ensured that even without the award, his commitment for child rights to survival, development and participation will be sustained.

The said Seal - signed by the DILG Secretary Mar Roxas and DSWD Secretary Corazon Juliano-Soliman as the CWC Chairperson on September 17, 2014 – was awarded personally by the DILG Provincial Director and concurrent Asst. Regional Director Abraham A. Pascua, Ph.D., CESO III to the Municipality of Rizal during the Flag Raising Ceremony last Monday, March 9, 2015.

Dir. Pascua reminded and challenged government employees particularly the leaders and head of offices to promote full commitment in serving the public.