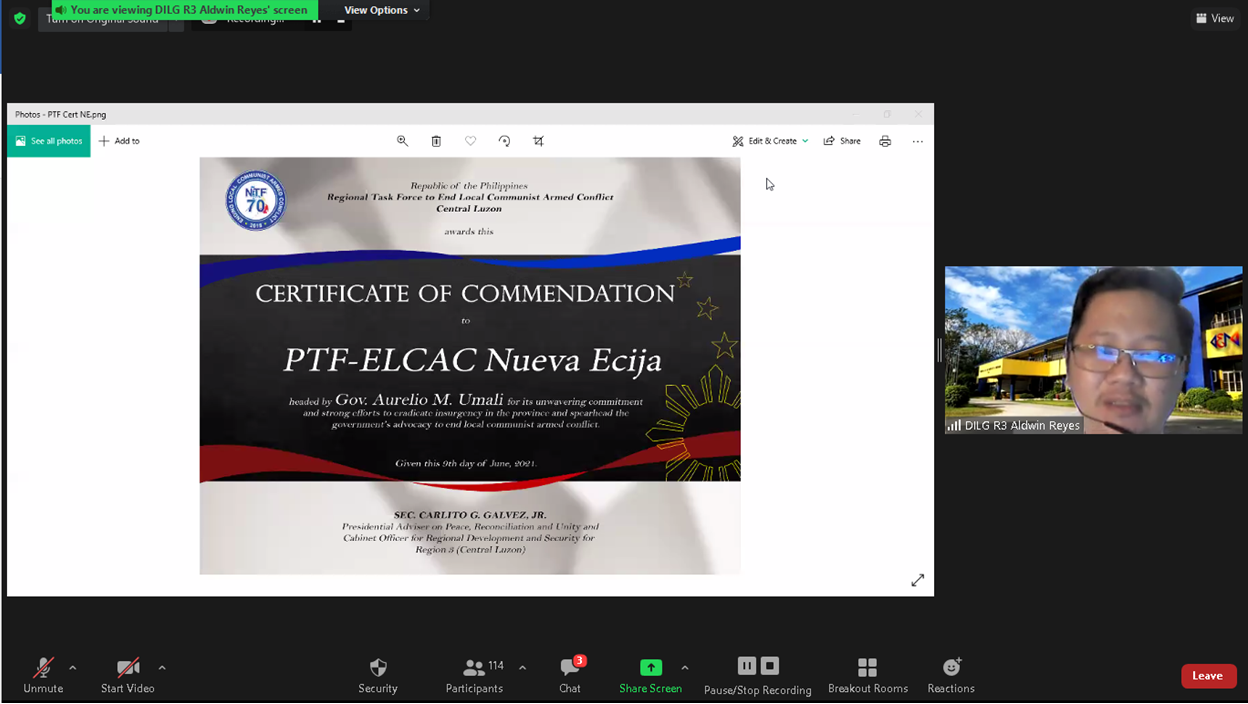 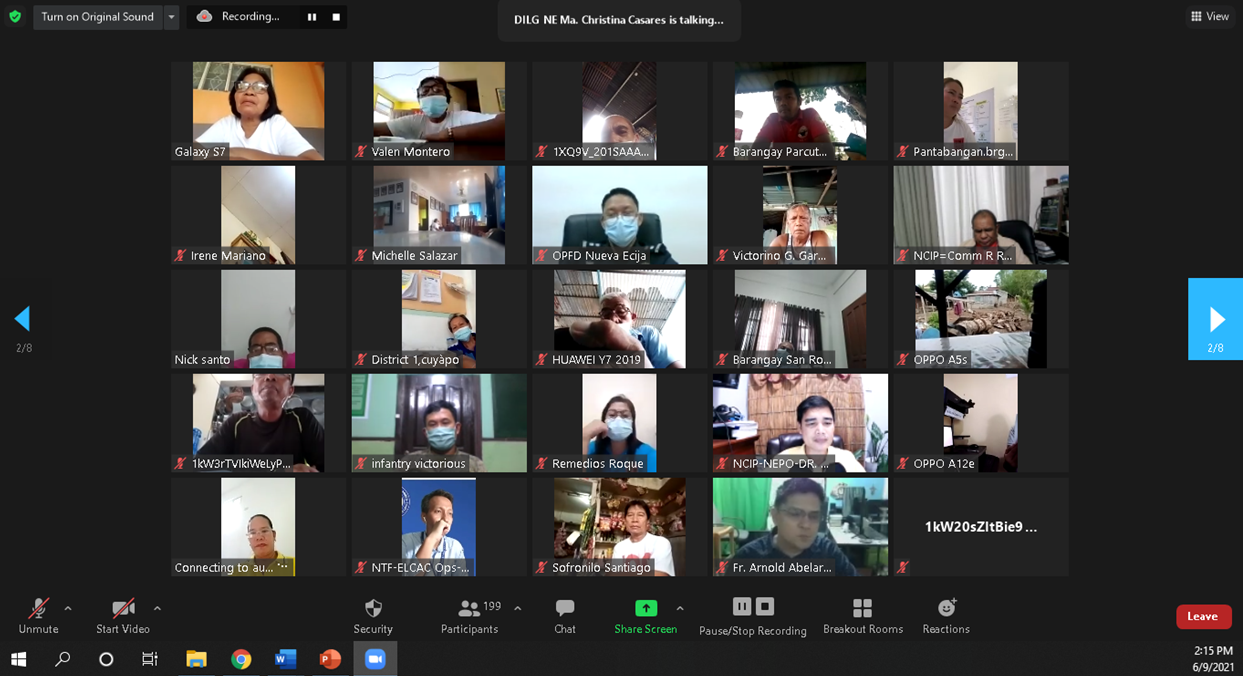 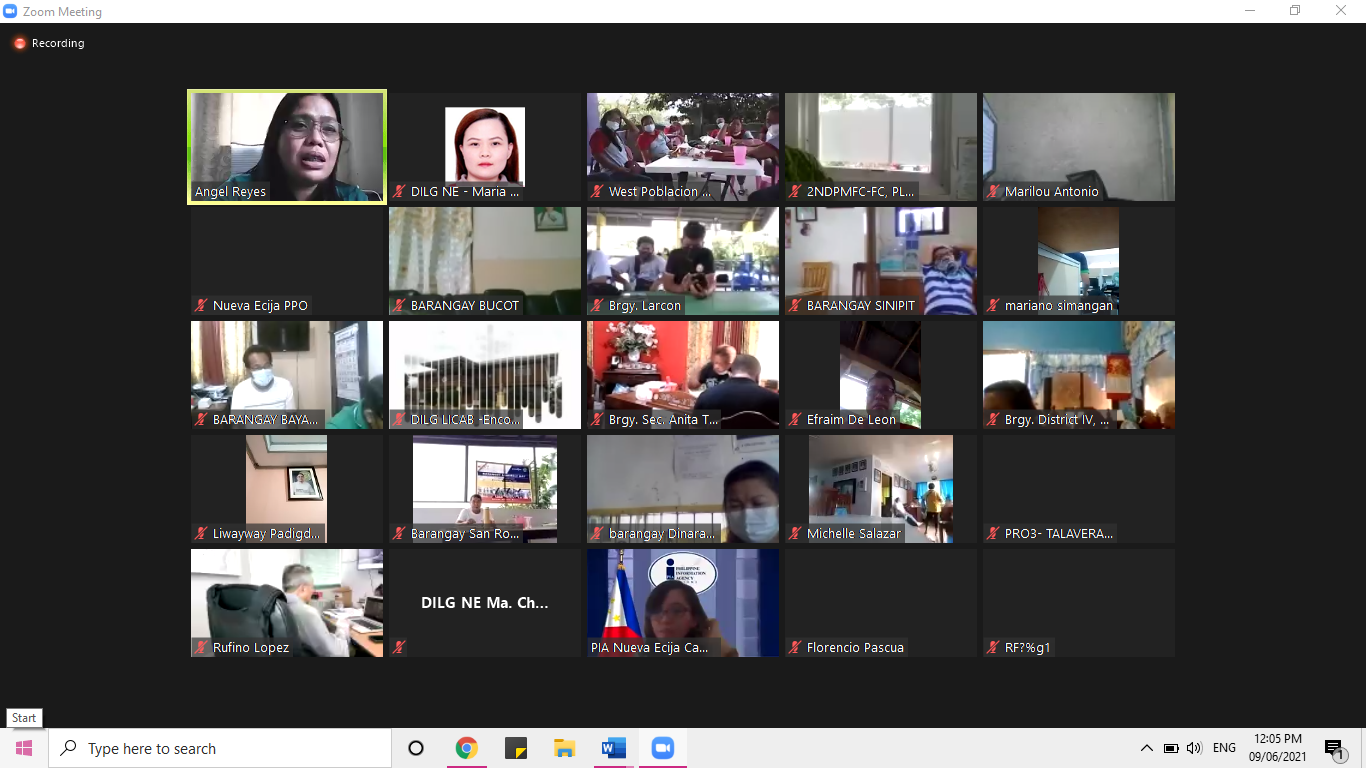 The main objective of the activity is to cascade down to the grassroots level the fullest understanding of the Executive Order No. 70 framework and the Knowing The Enemy (KTE) Framework and provide the experience for a Joint Planning and Alignment of Strategies across Task Forces.

Dr. Abraham A. Pascua, Executive Assistant and Consultant to the Governor on Local Government and Provincial Disaster Risk Reduction and Management, representing Governor Umali, mentioned that the Provincial Government of Nueva Ecija through the Governor, had made its valuable contributions and fair share in the desire of the National Government to end local communist armed conflict and ensure lasting peace in the country. He also presented some of the Payapa at Masaganang Pamayanan (PAMANA) Projects - parallel projects of the Office of the Presidential Adviser on the Peace Process (OPAPP) in the areas in Nueva Ecija that may have experienced insurgency. Projects such as Water Supply System in Barangay Labi, Bongabon and Sitio Botolan, Burgos, Carranglan were reiterated, among others. According to him, the proportion of projects mentioned may be mere as compared to others, but Gov. Umali believes that with the help of these projects, the Novo Ecijanos will be able to see the serious efforts and actions of the National Government to end the local communist insurgency and achieve lasting peace in our country.

One of the highlights of the activity were the presentations of PTF-ELCAC Significant Accomplishments unveiled by DILG Nueva Ecija as presented by LGOO V Kimberly B. Ruiz and partner agencies such as the Department of Trade and Industry (DTI) represented by Provincial Planning Officer Honeylen Fernandez and Ms. Jona Mae Vinculado as the representative from Technical Education and Skills Development Authority (TESDA).

Fr. Arnold M. Abelardo, CSO representative of PTF-ELCAC from Ako Ang Saklay Inc., conducted the synthesis of the program. He mentioned some of the livelihood projects provided by the Provincial Task Force of Nueva Ecija in coordination with the Armed Forces of the Philippines - 703rd Infantry Battalion and the Nueva Ecija Provincial Police Office for the rebel returnees in the province. He emphasized that such valuable and significant initiatives are deeply rooted from the love for our community, love for our creator and not from the defiance of the rebellions. He also accentuated social justice as the work of the government and the people. “Pagdating sa pagtulong sa mga mahihirap ang kulay na ating nakikita ay kulay ng Pilipino na may pagmamahal at pagmamalasakit sa isa’t-isa. Napaka importante po na ang ating mga LGUs, AFP, PNP, DILG and of course with the support and help of other agencies like DTI and TESDA, we believe here in Nueva Ecija, the Provincial Task Force, na darating yung araw [na] mas magiging maliwanag sa ating mga ka-probinsya that the way of peace is the best way… not just the absence of noise or war, nandiyan din yung human development.” 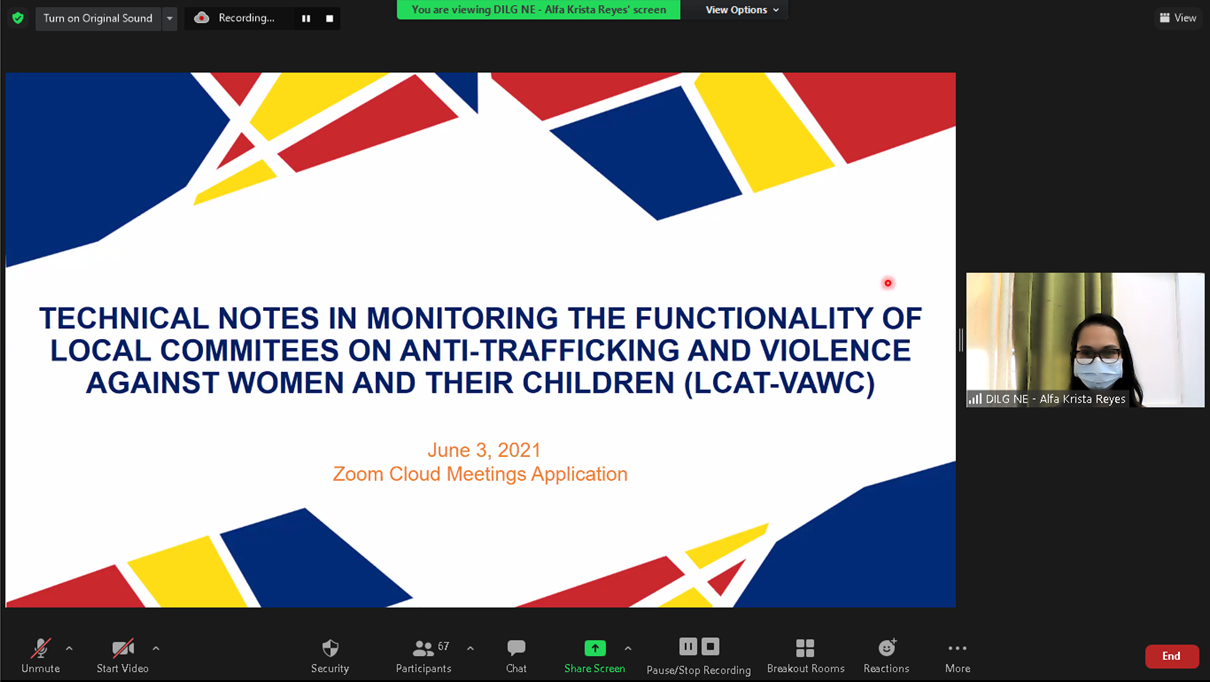 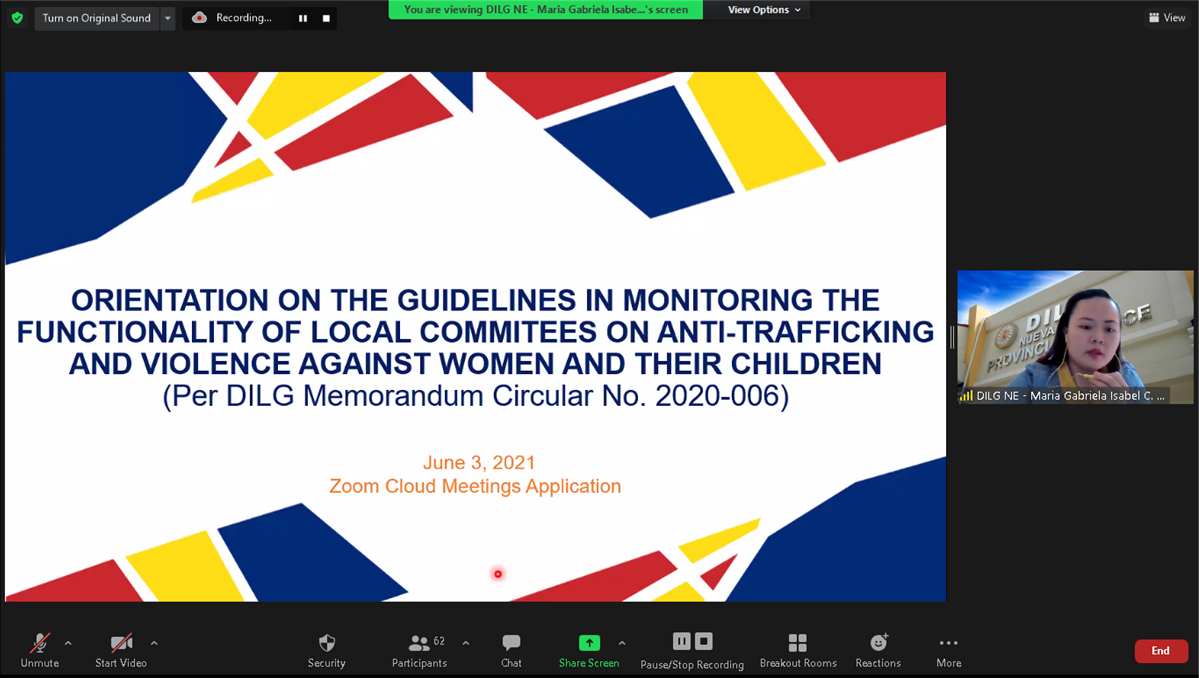 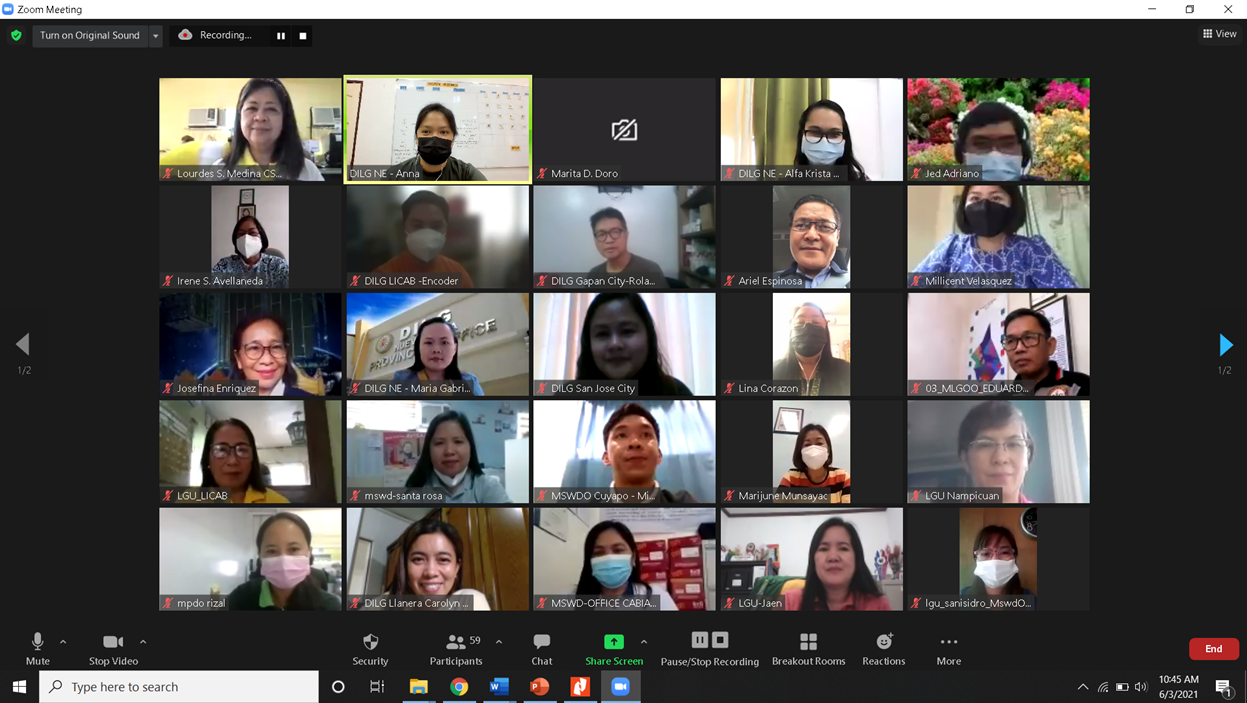 DILG Nueva Ecija has conducted a Provincial Orientation on the Guidelines in Monitoring the Functionality of Local Committees on Anti-Trafficking and Violence Against Women and their Children (LCAT-VAWC) on June 03, 2021 via Zoom Platform. It was attended by the DILG City and Municipal Local Government Operations Officers and Provincial, City and Municipal Social Welfare Development Officers of each LGU in Nueva Ecija.

Program Manager - LGOO VI Alfa Krista C. Reyes emphasized that the purpose of the activity is to ensure the uniformity in understanding of LGUs in the guidelines and documentary requirements to be submitted by the LGUs to the Regional and Provincial Inter-Agency Monitoring Teams for the CY 2019 and 2020 LCAT-VAWC functionality assessment.

LGOO II Maria Gabriela Isabel C. Bernardez presented the legal basis for the assessment and the various LCAT-VAWC related Joint Memorandum Circulars of the Department and its purpose. She also gave an overview of the composition for Areas of Assessment of LCAT-VAWC comprising of 10% for Organization, 10% for Meetings, 30% for Policies, Plans and Budget and 50% for Accomplishments.

LGOO VI Alfa Krista C. Reyes profoundly discussed the technical notes in monitoring the functionality of LCAT-VAWC and presented the official timeline for the assessment.

The LCAT-VAWC Functionality Assessment signifies the progressive governance that must be entrenched in every LGU even in these trying times.

Levelling off on recent issuances and reports, DILG Nueva Ecija holds monthly team conference for May 2021

To give light on the implementation of recent Department issuances, level off on the status of submission of reports, remind on report deadlines and address field concerns, all DILG Nueva Ecija personnel convened for a  Provincial Team Conference (PTC) last May 26, 2021 via Zoom Meetings application.

DILG Nueva Ecija is religiously conducting monthly PTCs to continually improve its services to its clientele.