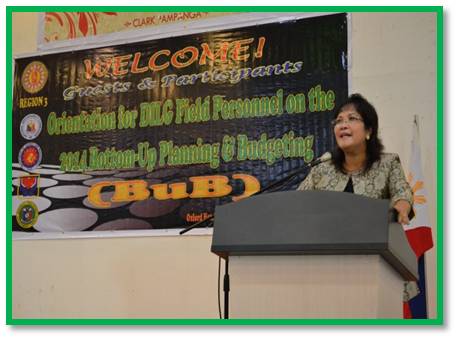 In consonance with the President’s “Social Contract with the Filipino People” calling for transparent, accountable and participatory governance, two Cabinet Clusters, the Human Development and Poverty Reduction Cluster (HDPRC), and the Good Governance and Anti-Corruption Cluster (GGAC) will carry out the implementation of the Bottom-Up Process in Planning and Budgeting (BUB for the Fiscal Year 2014 budget preparation.

Along this line, the Department of the Interior and Local Government in Region 3, facilitated the conduct of the Orientation on the Bottom-Up Process in Planning and Budgeting (BUB) for Fiscal Year 2014.  BUB Orientation for DILG Field Personnel from Regions I, II, III and CAR (Cluster I regions), Local Poverty Reduction Action Teams (LPRATs), and Civil Society Organizations (CSOs) were held on December 11, 2012, December 19, 2012 and December 27, 2012, respectively at Oxford Hotel, Clark Freeport Zone, Angeles City.

The series of one-day orientation-workshop sessions targeted the concerned DILG field personnel from two hundred twenty-three (223) focused cities and municipalities cluster-wide with the objectives of strengthening the roles of DILG Field Personnel (DILG being the chair of the Regional Poverty Reduction Action Teams) throughout the BuB process in providing support and guidance to LGUs.  Likewise, it aimed to orient the Local Chief Executives and Functionaries of the fifty-two (52) focused cities and municipalities of Region 3 to include their respective LPRATs particularly on their duties and responsibilities in utilizing the BUB process in planning and budgeting for FY 2014.  On the other hand, ten (10) Civil Society Organizations, together with concerned City/Municipal Local Government Operations Officers (C/MLGOOs) from these 52 focused cities and municipalities in the region were also oriented.

USEC Francisco L. Fernandez enjoined all DILG personnel to take the lead in participating and improving the process of Bottom-Up in Planning and Budgeting being a priority of the current administration.

RD Florida M. Dijan acknowledged the presence and cooperation of all guests and participants from the LGUs despite their hectic schedules during this period.  She gave a brief overview on the BuB process and enjoins the full cooperation of the LGUs in crafting their respective Local Poverty Reduction Action Plans responsive to the needs of the LGUs and will drive development of the LGUs towards poverty reduction.

Meanwhile, Assistant Regional Director Abraham A. Pascua stressed that Bottom-Up Budgeting is not a new concept for LGUs which was utilized already in the 1980’s in the Planning and Budgeting activities.  He also appraised the continuing efforts of the Regional Poverty Reduction Action Teams being chaired by the DILG and DBM as vice-chair in conducting relevant activities on BUB process.  Further, ARD Pascua explained the very purpose of inviting the LGUs for this activity to organize the LPRAT in order to prepare respective Local Poverty Reduction Action Plan (LPRAP).

During the open forum, most of the queries from the participants were clarification from the Joint Memorandum Circular 03-2012 specifically on the menu of programs, submission dates and other technicalities that the LPRAP may encounter in the process of approval.  The issue on non-cooperation of the Local Sanggunian in adopting the LPRAP thru a resolution was raised. CSO representatives were enjoined to avoid anticipation of the non-cooperation of the Local Sanggunian. Though this may happen in some LGUs, but experience will tell that cases involving provision of development projects to LGUs (especially Php 15M worth of projects) will be adopted/approved regardless of political situations in the LGU.  Further, membership to the LPRAT of the Sanggunian member-committee chair on Appropriations will assist the fast approval/adoption of the Local Sanggunian of the LPRAP.