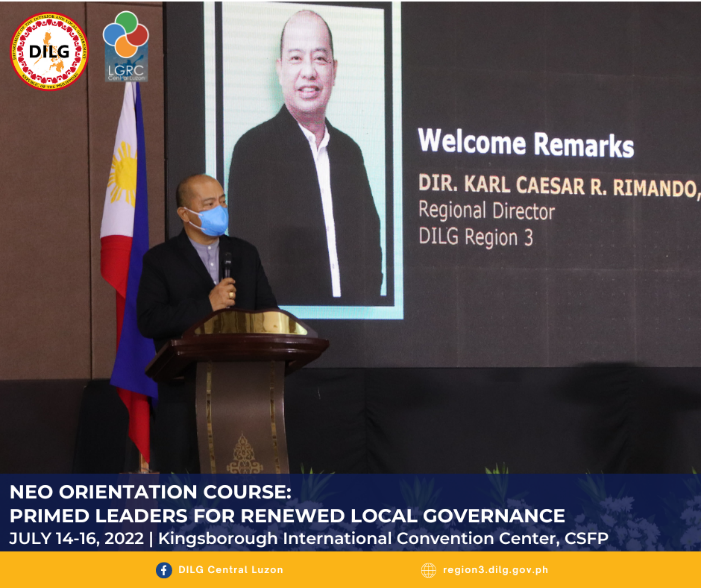 This DILG – Local Government Academy (LGA) initiated event was made possible by partnering with the League of Municipalities of the Philippines
(LMP) and the Local Governance Regional Resource Centers (LGRRCs) of DILG Central Luzon, DILG CALABARZON, and DILG MIMAROPA.

The activity is part of the 2nd component: "Jumpstarting Local Governance" of the program for NEOs which aims to provide a foundational and critical understanding of the organizational, political, and constitutional environment of public service at the local level.

On the 1st day of the orientation course, the new Secretary of the Interior and Local Government, Atty. Benjamin C. Abalos, Jr. graced the opening ceremony and gave a lecture on the importance of the Local Government Unit supervision role of the DILG and how the agency can help the newly minted and come backing Municipal Mayors in efficiently and effectively performing their roles and responsibilities.

During his welcoming remarks, Regional Director Karl Caesar R. Rimando echoed and emphasized the essential message of a quote from the late American Senator Margaret Chase Smith. Aforementioned quote provides "Public service must be more than doing a job efficiently and honestly. It must be a complete dedication to the people and to the nation."

Further, RD Rimando reminded the attending mayors that they should consistently uphold the Matino, Mahusay, at Maaasahan core principles of the DILG.