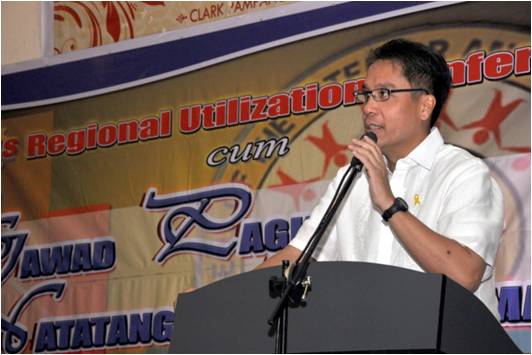 In his message, DILG Secretary Mar Roxas said that the awarding is one of the best ways to share the innovations and great performance manifested by every local government units (LGUs). It is also the department’s way to recognize the best practices of LGUs and encourage local governments to further strengthen these practices.

Furthermore, he shared the concept of good governance that President Benigno Aquino III envisioned from the very start of the latter’s term and further emphasized that the proper way of addressing the primary needs of the people is one of the best  concepts of good governance. Lastly, the secretary mentioned that although this concept entails a great challenge, it is the key to uplift the living of the general public.

For the LGPMS Awarding, Cabanatuan City took home the first place for Administrative and Social Governance.  Similarly, Dipaculao, Aurora was bestowed the first place award under Economic Governance. In the Environmental Governance, and in Valuing Fundamentals in Good Governance aspects, the province of Tarlac tops the entire provinces in Region III.  Moreover, a special recognition was awarded to the City of Angeles and Candaba, Pampanga for consistently garnering high ratings on LGPMS for profile years 2009-2011.

ng (SGH) Markers were handed over to the Governors of the seven provinces in Central Luzon namely: Aurora, Bataan, Bulacan, Nueva Ecija, Pampanga, Tarlac and Zambales and Mayors of the two Highly Urbanized Cities namely: Angeles and Olongapo.

As the awarding of the winners for different categories concluded, a recital of the Panunumpa Para sa Tapat na Paglilingkod at Tuwid na Pamamahala was led by National LMP President and Mayor of Paombong, Bulacan, Donato D. Marcos with the participation of all the local government officials.