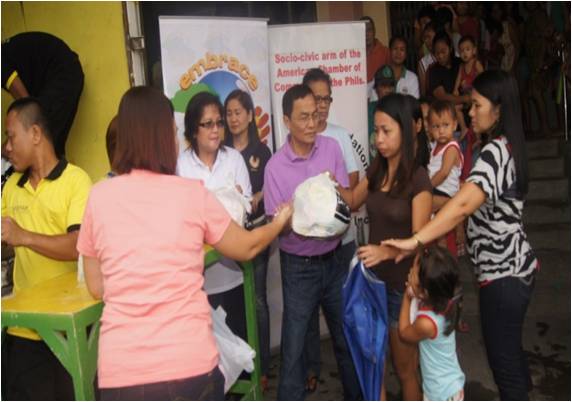 The American Chamber (AmCham) Foundation of the Philippines, Inc., in coordination with DILG Region 3, donated relief goods to the flood victims of Sto. Tomas, Pampanga on September 5, 2012 at the town’s Municipal Hall.  Beneficiaries were 200 affected families as identified by their Municipal Social Welfare Development Office (MSWDO).

RD Dijan stated that DILG recommended to AmCham the municipality of Sto. Tomas as the foundation’s recipients of the relief goods since it was one of the worst hit areas by “Habagat” in Pampanga.

On the other hand, Ms. Hilario said that one of their foundation’s activities after the onslaught of Monsoon Rain, “Habagat” is disaster relief operations for flood-stricken victims in the different areas of the country.

The AmCham Foundation serves as the socio-civic arm of the American Chamber of Commerce of the Philippines member companies.  It is a private, independent, non-profit association dedicated to the promotion and development of trade, commerce and industry of the United States of America and with the Republic of the Philippines.  Further, it cultivates friendly relations between American and Filipinos and facilitates the coordination of American business efforts geared toward the country’s progress.