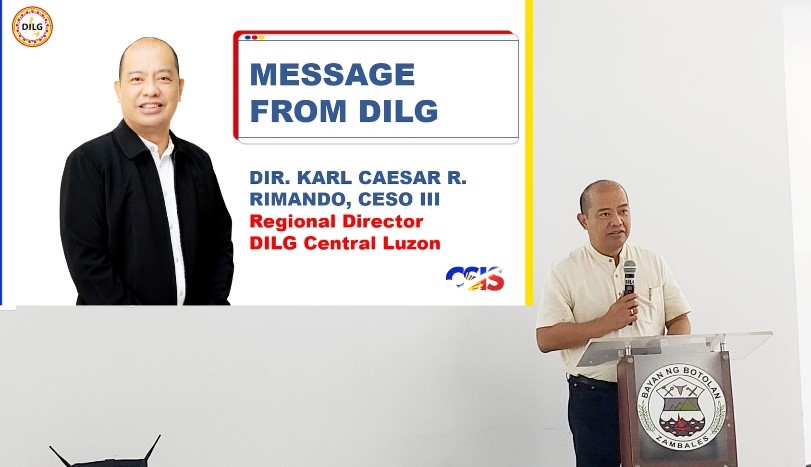 The Department of the Interior and Local Government (DILG) Central Luzon thru the DILG Zambales Provincial Office and its partner Local Resource Institute (LRI), President Ramon Magsaysay State University (PRMSU), spearheaded a back-to-back Focus Group Discussion (FGD) and Utilization Conference (UC), which are in line with the implementation of the Citizen Satisfaction Index System (CSIS) Project, a performance-based measuring tool of the DILG in the Municipality of Botolan, Zambales.

The said undertaking was conducted on April 6 and 7, 2022 at the Conference Room of Botolan Municipal Hall, Barangay Batonlapoc, Botolan, Zambales, and started with the focus group discussion facilitated by the PRMSU with the civil society organizations (CSOs). This served as an avenue to deliver the citizen satisfaction survey results to the CSOs and determine relevant interventions from their organizations to deepen their participation in local governance through the local special bodies. Twenty-three (23) CSOs in the LGU participated in the process.

Furthermore, the second day of the activity focused on the presentation of the CSIS research findings to the local government unit (LGU) of Botolan, with the officials, department heads, CSOs, national government agencies (NGAs), representatives of PRMSU, and other stakeholders in attendance. In the undertaking, the participants responded to the survey's areas of concern and were oriented to the crafting of the Citizen-Driven Priority Action Plan (CPAP), which shall contain the concrete set of actions of the LGU to answer the survey's areas for improvement. A signing of the pledge of commitment was also facilitated by the DILG.

In his message, DILG Regional Director Karl Caesar R. Rimando thanked the PRMSU and the Municipality of Botolan for accepting the challenge in hurdling the implementation of the CSIS despite the pandemic. He underscored that the gains of the CSIS project will answer unseen concerns of the citizens and shall lead to the best version of public service the LGU can potentially deliver.

In response, Mayor Doris E. Maniquiz expressed her gratitude to the DILG and PRMSU and accepted the challenge that she will leave behind to the LGU functionaries and other stakeholders, in uplifting the lives of the Botoleños on their commitments they have delivered.

DILG Zambales Provincial Director Armi V. Bactad and PRMSU Vice President for Research Extension and Training, Dr. Elizabeth N. Farin, shared their respective messages and expressed their admiration to the LGU for allowing their office to be assessed and welcomed the concerns and comments of the respondents.

The CSIS is a program of the DILG with the assistance of a Local Resource Institute that utilizes a set of data tools designed to collect and generate relevant citizens' feedback on local governments' service delivery performance and on the citizens' general satisfaction.