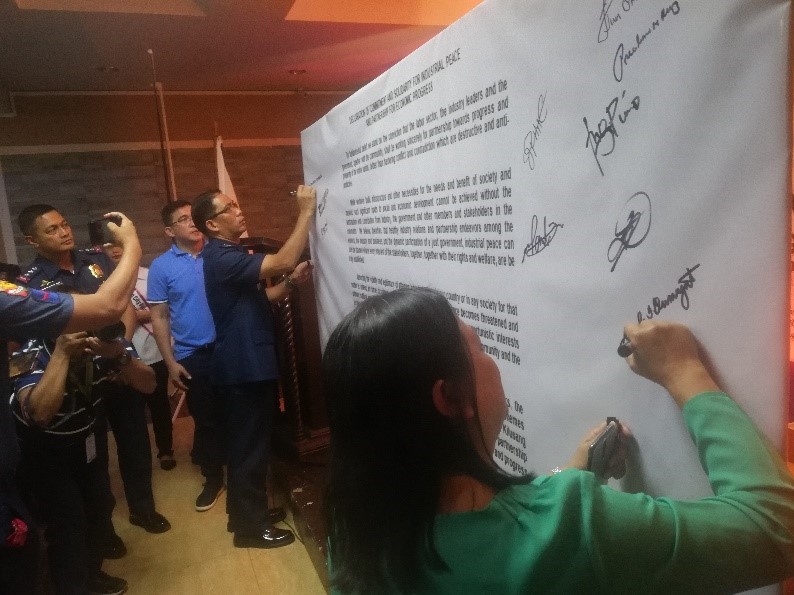 City Director Amada T. Dumagat took part in the ceremonial signing of the Declaration of Commitment and Industrial Peace and Partnership for Economic Progress on February 18, 2020 expressing the support of the Department of the Interior and Local Government-Olongapo City in the fight against the radical labor infiltration of the Communist Party of the Philippines-New People's Army-National Democratic Front (CPP-NPA-NDF).

The ceremonial signing took place during the launching of the Joint Industrial Peace Concerns Office (JIPCO) co-led by the Olongapo City Police Office and Zambales Police Office aiming to inform the local government units, locators and other stakeholders on the course of actions of CPP-NPA-NDF in coercing businessmen and infiltrating business companies to promote communist idealism.
JIPCO, a community relations program of the PNP, intends to establish the first line of defense of industries against insurgency and other crimes occurring at the workplace. It reinforces the objectives of the Task Forces to End Local Communist Armed Conflicts indicated in Executive Order no. 70, Series of 2018.
"JIPCO is a timely and essential mechanism to protect labor welfare, labor rights and productive industry gains without sacrificing industrial peace," said PCOL. Benjamin Sembrano, OCPO City Director, during his message.