DILG R-3 has conducted a General Orientation for 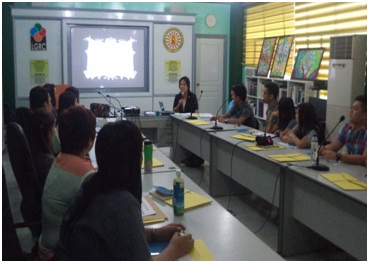 Local Government Operations Officers (LGOO) II on August 12–28, 2014 at the DILG-3 Regional Office. The orientation aims to underline familiarity on various basic concepts and areas on governance in relation to the mandate of the DILG and the official functions of the LGOOs. It also prepares and guides the trainees for their attendance to the LGOO II Center Training. A total of 43 DILG personnel participated in the orientation

In her opening remarks, RD Florida M. Dijan welcomed everyone and gave guidance to the trainees to always do their best in everything that they do. She further mentioned the importance of having good attitude in the performance of their role as DILG Officers. Likewise, RD Dijan expressed her gratitude to the resource persons – the MLGOOs/CLGOOs for selflessly sharing their time and expertise in molding new LGOOs.

OIC-CDD Martin Porres B. Moral gave an overview of the 11-day activity and the presentation of mechanics/house rules in order to guide the participants.

Highlighted during the orientation was the role of DILG, Philippine Local Government System and Finance and Administrative Matters. Activities that were employed by the resource persons included presentations, workshops and open forum. One of the outputs was the Personal Plan of each participant which was drafted and presented to the plenary. Said plan included their mindset, goals and the different strategies that they will do to be an efficient and effective LGOO. An examination was also administered to assess the participants.

During the closing program, CDD Chief Moral announced the results that all fifteen (15) LGOOs II passed the requirements of the General Orientation. He congratulated and thanked everyone for their support and active participation.