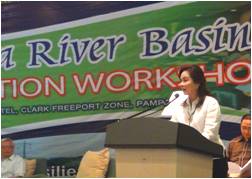 The activity was attended by representatives from the municipalities of Region 3 and neighboring provinces from Region II specifically Nueva Vizcaya and Pangasinan.  The event aims to provide local officials with knowledge on reducing risks and casualties from natural hazards through proper preparation and information dissemination.  Another objective was to initiate a continuous partnership and collaboration among the Local Government Units in the face of disaster. Adaptation to natural impediments through harmonized efforts and alliance building which shall guarantee effective results.

Vice-Governor Joseller “Yeng” Guiao welcomed the participants in behalf of Governor Lilia B. Pineda who is on travel outside of the country. The province of Pampanga expressed its gratitude to National Government Agencies that have extended their assistance to the Provincial Government especially during calamities.

Guest of Honor Senator Loren Legarda encouraged everyone to join her campaign in protecting all 18 Major River Basins. She also pointed out the importance of preparedness in order to prevent natural hazards from turning into natural disasters. Moreover, she believes that through intelligent management of natural hazards, not only lives can be saved, but also livelihood, this scenario will pave the way into a stable economy and progressive country. The event was also valuable to the proposed bill of Senator Legarda – “Philippine River Basin System Administration Act of 2012”.

Dir. Sacendoncillo shares her insights and initiatives of other LGUs

utive Director of the Local Government Academy, Governor Wilhelmino M. Sy-Alvarado of Bulacan, Vice-Chair of the Regional Development Council of Region 3; Mr. Edgardo E. Tongson; and Mr. Silverio Tandog of the World Wide Fund for Nature Philippines, shared their experiences, strategies and existing initiatives which can be used as a framework of other Municipalities and Provinces.

Lastly, Dir. Thelma T. Vecina, Assistant Director, LGA-DILG facilitated a workshop and commitment building which aimed to craft a common action/roadmap for LGUs and other stakeholders in creating a dynamic river basin.